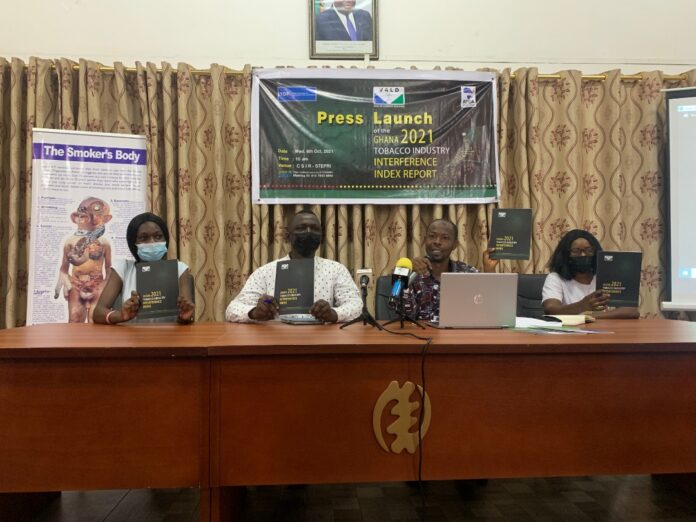 The Vision for Alternative Development, VALD, an Anti-Tobacco group has successfully launched this year’s edition of the Ghana Tobacco Industry Interference Index Report.

The brief ceremony which took place in Accra on Wednesday, 6th October 2021 forms part of the Global Tobacco Industry Interference Index, a global survey aimed at documenting how public health policies are protected from the industry’s subversive efforts, and how the government have pushed back against this influence.

The first Tobacco Industry Interference Index was initiated by the South-East Asia Tobacco Control Alliance (SEATCA) as a regional report.

In 1982, Ghana introduced tobacco control measures under an official government directive. Ghana also became a party to the WHO framework convention on tobacco control (WHO-FCTC) on 27th February 2005. The public health act which includes the Tobacco Control Regulations (Act 851) was also introduced in 2012.

This act governs among other things, smoking in public places; tobacco advertising, promotions, and sponsorship; and tobacco packaging and labelling.

Despite these major strides made in reducing the use of tobacco products in the country, significant gaps remain.

Speaking at the event, the Executive Director of programs, Mr. Labram Musah Masawudu stated that specific measures and approaches were deployed in developing the report in order to curb the use of tobacco.

“The study gathered information on the level of industry participation in policy development; tobacco-related activities; benefits to the tobacco industry; forms of unnecessary interaction, transparency, conflict of interest and the preventive measures in place to control activities of the tobacco industry. This approach was made through a search of peer-reviewed journals articles, grey literature, media reports, government reports, and non-state actors reports,” he stated.

He added that there have been several findings on the operations of the tobacco industry in Ghana and the government’s approach on the issues.

“The government of Ghana prohibits the participation of tobacco industry actors in local policy development. The Tobacco control Inter-Agency Coordinating committee membership does not include the tobacco industry, even though they made attempt to join.

He continued, “the minister of Health is to develop a code of conduct prescribing standards for public officers. This code is yet to be developed. Further delay in developing clear guidelines for the exclusion of the tobacco industry in policy development may create an open for the tobacco industry to take advantage of the situation and explore it.”

He added, ” the responsibility is on the government to put this law in place and ensure the compliance of all of its agencies. The lack of adequate measures has resulted in the rise of tobacco CSR activities, Benefits to the industry, unnecessary interaction, transparency, conflict of interest and preventive measures.

Recognizing the low level of government’s commitment in the implementation and enforcement of the tobacco control measures and WHO-FCTC.

Mr. Labram Musah Masawudu recommended the government to prioritize surveillance and monitoring of the activities of the tobacco industry in the country.

“It appears there is a clear violation of the TC laws which to large extend benefits the tobacco industry. The continuous sale tobacco in single sticks despite a ban on such, the influx of illicit tobacco products in the markets, the ‘Duty-Free’ tobacco products at the country’s ports, among others all amount to huge benefits and incentives to the tobacco industry while the country loses huge sums of revenue,” he stated.

Mr. Labram Musah recommended the government to ban all tobacco-related CSR activities, a code of conduct be developed by the Ministry of Health, to review the price of tobacco products and propose appropriate measures to effectively regulate the affordability and access to tobacco products.

He also recommended the upgrade capacity and equip officials to enable them to embark on special operations to clamp down on promotional activities veiled under the creative arts industry, using musical lyrics, movies, musical videos, and others.

The media should be trained to pressure the government to fully implement the WHO-FCTC guidelines to support the enforcement of existing local legislation for tobacco control.

“We also call for the total cancellation of the recently suspended track and trace system awarded to “De La Rue” by the GRA and open up a fresh application process that is independent and transparent devoid of tobacco industry involvement,” he recommended.

Md. Mary Assunta of the South-East Asia Tobacco Control Alliance, SEATCA via zoom reiterated the significance of reducing the intake of tobacco and its consequences.

She stated that the contribution of some governments across the world plays a major role in its consumption.

According to her, the fight against the tobacco industry should be of keen interest among Ghanaians.

She commended the Anti-Tobacco group, Vision for Alternative Development, VALD, for their perseverance and determination in fighting against the tobacco industry and consumption.