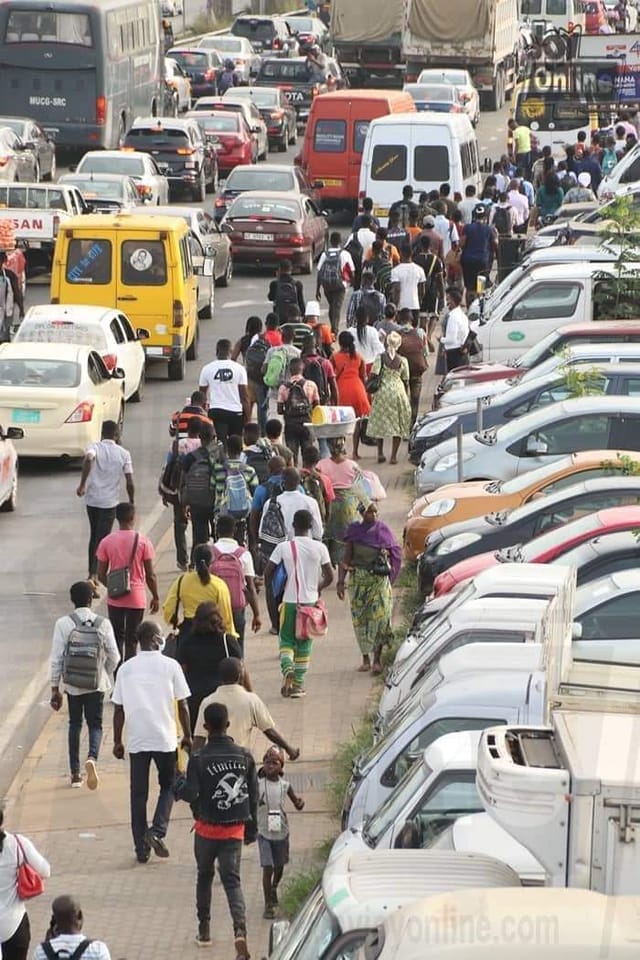 The strike was to compel the government to reduce the price of fuel in the country.

According to the Transport Operators, the hikes in petroleum prices are negatively affecting their work and they have engaged the government on several occasions for a reduction without success.

They said at their last meeting, the government promised to reduce it but that has not been done hence the strike. Passengers this morning went through hell getting to their destinations.

The protest by commercial drivers has resulted in clashes between some private vehicle drivers and the protestors at Ablekuma Curve on the Awoshie-Pokuase Highway in the Ga West Municipality.

Apart from the attacks on private commercial drivers, particularly those using smaller vehicles, protestors were also seen attacking their fellow commercial vehicles with passengers in their cars.

Meanwhile, Police at Anyaa-Sowutuom in Accra arrested more than five drivers who were demonstrating as part of a sit-down strike by commercial transport operators nationwide over the rising cost of fuel in the country.

The drivers, while chanting and singing, moved from one end of the road at Ablekuma Central to the other, causing vehicular traffic.

The sit-down strike also took effect simultaneously across the regions.

Our correspondents report that many people were stranded on their way to work.

Meanwhile, General Secretary of the GPRTU Godfred Abulbire has confirmed that the Unions in a bid to resolve the issue amicably.

ALSO READ  Man Utd derby defeat ramps up pressure on Solskjaer as Chelsea held
AMA GHANA is not responsible for the reportage or opinions of contributors published on the website.