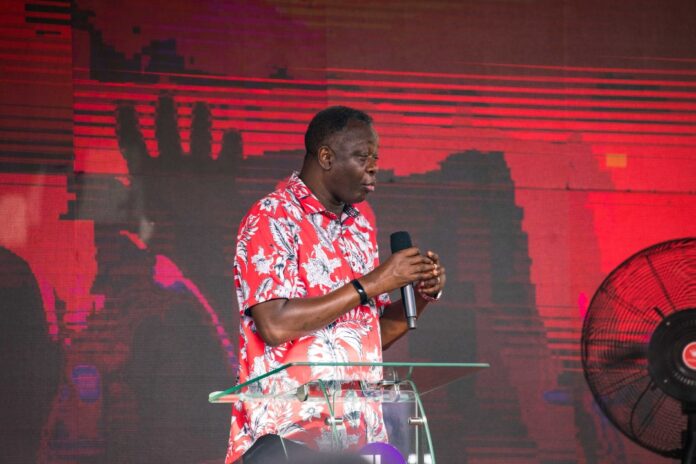 Staff members of the Jospong Group of Companies (JGC) and for that matter Ghanaians have been urged to put to profitable use their God-given talents/gifts and not bury them.

The President of the Eastwood Anaba Ministries (EAM), Rev. Joseph Eastwood Anaba, who made the call on Tuesday, December 7, 2021, (day two of the 2021 Annual Thanksgiving Service of JGC), said just as God gave gifts or resources to the slothful, He equally gave same to the Executive Chairman of JGC, Dr. Joseph Siaw Agyepong, who has largely excelled in his God-given talent.
The five-day thanksgiving service is themed: “My Worship, My Weapon, His Glory” – 2nd Chronicles 20:22.

Rev. Eastwood Anaba said slothfulness in life attracts rebuke, retrieval and rejection adding that “a slothful and failing servant vents his frustration on others, which makes such a person impolite and insolent.”

“Failures in life could be impolite and impolite people are insolent and indolent,” he added.

According to him, indiscretion and impatience were evident as testaments of a failing servant.

Rev. Eastwood Anaba thus challenged the staff members of JGC to see possibilities in everything, insisting that God gave each one of us talent as He did same to Dr. Siaw Agyepong.

He advised the workers against burying their God-given talents stressing that out of same lied greater results.

Quoting from the book of Matthew 25, he said God in His infinite wisdom gave talents to some servants of which the first who received five doubled them while the second also received two.

However, he said the third who received one, hid his talent and never put it to any good use.

“The master upon returning from a journey rebuked this servant who received one talent and did nothing with it,” he narrated.

He said out of the 17 verses, Jesus dedicated 7 to address the slothful, adding that “Slothful and failing servants attribute their failures to others rather than themselves”.

Rev. Anaba noted that a slothful person faces retrieval of talents and therefore encouraged mankind to put their talents to good use.

For his part, the Executive Chairman, JGC, Dr. Jospeh Siaw Agyapong, recounted that during his early days when he was operating a printing press business nothing seemed to be working for him.

“It was at that moment that I resolved to go to Begro and seek the face of the Lord and there I had a dream. I later travelled to China and saw tricycles collecting refuse. I then purchased one and later 300 then I acquired four plots of land at the Group’s current location which is our headquarters.”

…In all our understanding of doing things, God has a way in it. Looking at the life span of this business which has footprints in all 260 districts across the country shows that it was made possible by only God”, he testified.

The gathering was thrilled by award-winning Gospel Minister, Ms. Diana Hamilton, with her aesthetic voice empowered by the Holy Spirit.