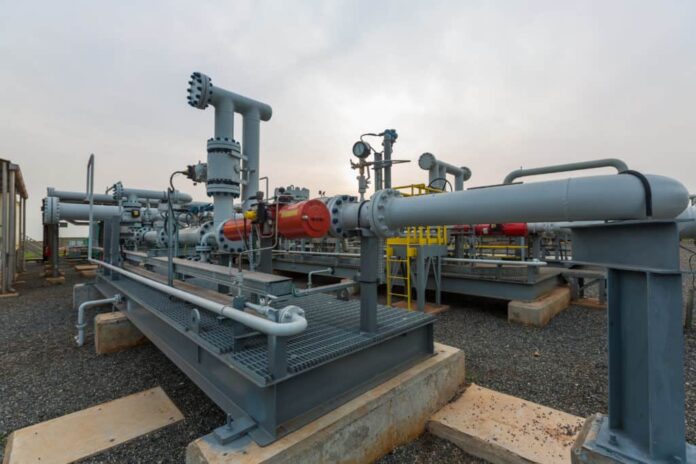 NIAMEY, Niger, February 17, 2022/ — Niger, Algeria, and Nigeria have signed the ‘Declaration of Niamey’ during the third edition of the Economic Communities of West African States (ECOWAS) Mining and Petroleum Forum (ECOMOF) in Niamey on February 16, 2022.

Signed by H.E. Mahamane Sani Mahamadou, Minister of Petroleum, Energy and Renewable Energies for the Republic of Niger, H.E.Mohamed Arkab, Minister of Energy and Mines, Algeria, and H.E. Chief Timipre Sylva, Minister of State for Petroleum Resources of Nigeria, the agreement will see the development resumption of the multi-billion-dollar Trans-Saharan Gas Pipeline project.

With a length of 4,128 kilometers, the gas pipeline will link Warri in Nigeria to Hassi R’Mel in Algeria, passing through Niger. Upon completion, the pipeline will carry 30 billion cubic meters of natural gas yearly from Nigeria, Algeria, and Niger to European markets via Algeria’s strategic Mediterranean cost, as well as supply inland stations along its route.

The pipeline will enable Europe to tap directly into the three country’s significant natural gas reserves, thus diversifying its supply in the wake of the current energy crisis, while creating critical sources of revenue for African gas markets.

“This project will be transformational for all the countries involved and we in Nigeria are committed wholly to making it a success. It will bring jobs and much-needed revenue from gas monetization” stated H.E. Chief Timipre Sylva.

Much of the estimated $13 billion pipeline cost will be spent in Niger, acting as a much-needed boost for the already growing energy sector and wider economy. More importantly, the pipeline will also enable Niger to monetize its own huge gas reserves, estimated at 34 billion cubic meters with recoverable reserves of 24 billion cubic meters.

H.E. Minister Mahamadou’s plans include the use of domestic gas to develop a petrochemical industry, with the production of by-products like ammonia, urea, and fertilizers. This will have the added benefit of boosting agriculture which remains a major employer in the country and the entire region.

Through the much-anticipated completion in 2023 of the Niger-Benin pipeline – a 2000 km pipeline that will run from the prolific Agadem basin in Niger to the Cotonou terminal off the coast of Benin – Niger will increase its current production from 20,000 to over 120,000 bpd.

This $2.2 billion pipeline will unlock an additional $3 billion in field development investments by Chinese major CNPC, which is the operator of the Agadem discoveries.

The pipeline is also expected to boost exploration in Niger, as explorers are expected to take advantage of the relatively cheap exploration and development costs in the country – $15/ barrel – compared to other international frontiers.

During his opening speech at ECOMOF 2022, H.E Mahamadou highlighted the development of regional energy infrastructure as a cornerstone of H.E President Mohamed Bazoum’s economic policy.

The government intends to focus on the development of gas and gas to power infrastructure in an effort to monetize gas resources as well as achieve 100% electrification in the country.

The Niger oil and gas sector is gaining huge momentum and transforming its economy. The minister also highlighted the demand for regional economic and social development driven by the benefits derived from the oil and gas and energy sector. He presented a positive vision of the sector and stressed the government’s efforts to ensure that the benefits of the sector benefit every Nigerian.

The government will focus on the development of skilled workers, with the creation of a higher institute dedicated to the training of technical staff and engineers.

The aim is to have at least 50% of all technical roles in the sector filled by Nigerians within the next 10 years. The development of Niger’s oil and gas industry is a key stated objective of the Government of Niger, and by 2025, is expected to represent approximately 24% of GDP, 45% of tax revenues, and 68% of exports as well as 8% to 12% of formal employment in Niger.

“We are happy to be in Niamey and fully support this project. The energy industry and the working men and women in Africa applaud Nigeria, Niger Republic and Algeria for sending a strong message that the Trans-Saharan pipeline is in our best interest as it will improve energy security, create good paying jobs and expand much needed economic growth,” stated NJ Ayuk, Executive Chairman of the African Energy Chamber, adding that “Restarting this project, sends a clear message to investors, and important strategic partners in Europe and Africa, that things are changing in Africa. We will be pushing to have some key milestones and agreements signed and announced during African Energy Week in October in Cape Town.”

Niger aims to become a hub for hydrocarbons, petrochemicals and associated products in West Africa and the Trans-Saharan Pipeline projects only serves to enhance this trend.

The planned energy infrastructures will boost Niger’s growth and position it as a key bridge between resource-rich sub-Saharan Africa and the Maghrebian and European markets.

This is good news for investors and services companies seeking for attractive returns in one of Africa’s most promising hydrocarbons frontiers with one of the continent’s most stable democracies.