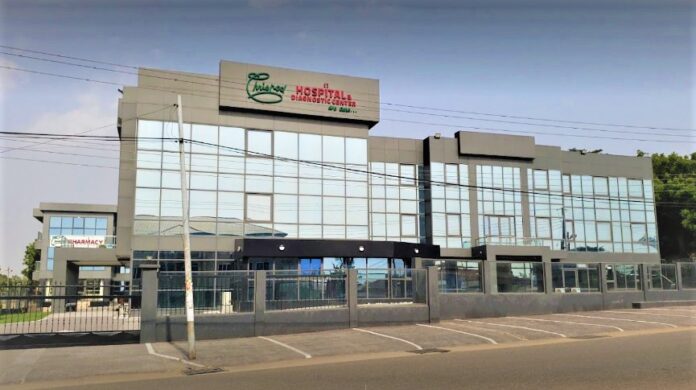 While the provision of healthcare is widely recognized as the responsibility of government, private sector capital and expertise are also viewed as essential resources for increasing efficiency, expanding access to services, and introducing innovative technologies.

It is against this background that Chrispod Hospital & Diagnostic Center (CHDC) a 24-hour operating private health care facility located within Dome, Parakuo Estates, in the Dome Kwabenya Constituency, has officially been opened to Ghanaians and the general public to access top-class professional medical services.

CHDC, which was opened on Thursday 24th February 2022, is established to serve the growing population of Dome and its environs.

The establishment of CHDC demonstrates the critical role the private sector can play in meeting the need for more and higher-quality health care in Ghana.

This critical milestone underscores the fact that engaging the entrepreneurial talents of the private sector is essential in improving access to health care in the country.

The hospital is categorized under primary health hospital.

CHDC looks to become a ground-breaking leader in health care with the most innovative technology.

The grand opening ceremony was graced by the chiefs and people of Parakuo, top dignitaries led by the Ga East Municipal Chief Executive Mrs. Elizabeth Kaaki Mann, members of the business community, members of staff and family, and friends of the Founder Mr. Christian Kpodo.

Speaking at the dedication and grand opening of the facility, the Founder of Chrispod Hospital CHDC, Mr. Christian Kpodo, urged the business community to get involved in the country’s infrastructure development, particularly in the area of health care delivery.
“The government alone cannot shoulder all the responsibilities hence requires help from the business community to assist by establishing health centers to help improve the health sector,” Mr. Chris Kpodo indicated.

Touching on the inspiration behind the establishment of the Hospital, the business mogul said he once had a very bitter experience at Korle-Bu who compelled him to do something about Ghana’s health sector.

“I visited the Korle-Bu Teaching Hospital for treatment and I was told I cannot be admitted because there were no beds available at the nation’s premier hospital,” he lamented.

He further said this ordeal at Korle-Bu some years back pushed him to mobilise resources together to build a hospital where every patient who visits the facility can be well attended to in terms of hospital beds.

Chrispod Hospital is a 60-bed capacity hospital with state-of-the-art ultra-modern equipment to help ease the pressure on the Dome Kwabenya District Hospital which was commissioned by the president of the Republic some few years back.

Mr. Christian Kpodo further appealed to Ghanaians to rally behind him and the staff so that the hospital can serve the needs of all and sundry.

The Municipal Chief Executive of the Ga East, Hon. Elizabeth Kaakie Mann stated that quality healthcare delivery is paramount in the socio-economic progress of every Nation and therefore it is important government invest heavily in the sector.

According to her, efforts are been made at the Ga East Municipality to address the health care concerns, including the sustainable development goal, which seeks to reduce child mortality, malaria, and other communicable diseases.

She is of the view that the opening of the Chrispod Hospital and Diagnostic Centre will be of great benefit to the local community both in terms of healthcare delivery and employment opportunities.

It is our firm belief that CHDC will make a significant contribution to the health care delivery in the Ga East Municipality and soon become an icon of the health sector in this country,” she opined.

Hon. Elizabeth Kaakie Mann, therefore, entreated the hospital staff to work hard and be very hospitable to their clients.