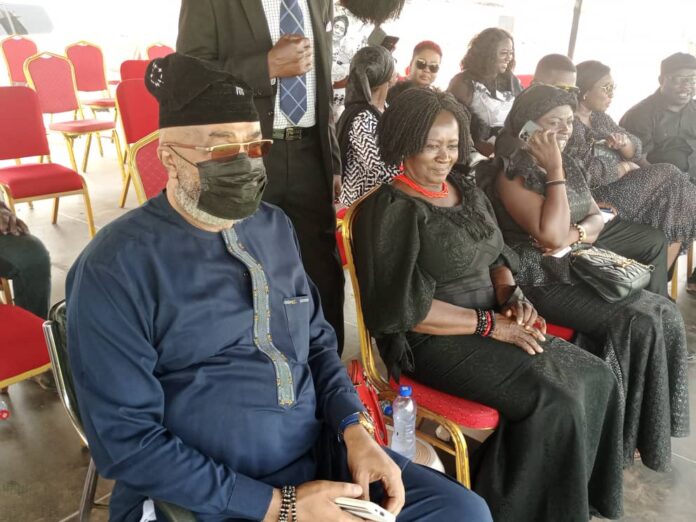 On Friday, 11th March 2022 the opposition National Democratic Congress (NDC) Young Democrats, an emerging political group, thanked the party’s national vice chairman for his commitment and dedication to the NDC’s course throughout the years.

Mr. Sinare’s devotion and behavioral norms, according to the group, galvanized the party’s youth nationwide, particularly those at the grassroots level, who committed their unwavering support for him in heightened campaigns to boost the NDC’s fortunes in the approaching general election.

Mr. Japhet Festus Gbede, the Former Communications Director of the NDC Youth Group, told the media that the group has 5000 active members and that it will soon launch a delegate-to-delegate campaign to promote the achievements of the hardworking National executives to the delegates.

He specifically mentioned H.E Alhaji Said Sinare, saying that his hard work for the party, even while in opposition, inspires the youths, and that they will put their lives on the line to ensure that he is retained so that the party can capture votes from the Zongos, floating voters, and the masses with his experience and strategic campaigning methods.

“Your years of dedication to the NDC have inspired us much, and we are fully behind you in organizing the people and other resources required for the NDC to win the December 7 elections by a wider margin,” he said.

In a statement, he copied to the media Japhet reiterated that a vote for H.E Alhaji Said Sinare is a vote for the NDC to win the Zongo votes and a vote from the grassroots.

Our party’s ability to acquire power and efficiently allocate our country’s resources toward national development, as well as our party’s tendency to preserve power, is dependent on the choice we make in the upcoming internal elections.

The devotion and dedication of party officials who will work exhaustively without being self-seeking are critical to gaining power. H.E Alhaji Said Sinare, the present National Vice-Chairman, is one of the safest bets we can make as a party, part of his statement reads.

A VOTE FOR H.E ALHAJI SAID SINARE GIVES THE NDC THE UPPER HAND IN THE ZONGOS AND THE GRASSROOTS; A POWER.

H.E Alhaji Said Sinare, the National vice-chairman of the NDC has offered and delivered the best in him to the peak of his power, knowledge, and capacities as the National Vice-Chairman of our party towards the 2016 and 2020 elections, and I believe he must be recognized as one of the experienced hands to go unchallenged.

Our party’s ability to acquire power and efficiently allocate our country’s resources toward national development, as well as our party’s tendency to preserve power, is dependent on the choice we make in the upcoming internal elections.

The devotion and dedication of party officials who will work exhaustively without being self-seeking are critical to gaining power. H.E Alhaji Said Sinare, the present National Vice-Chairman, is one of the safest bets we can make as a party.

The position of National Vice-Chairman should be carefully assigned to an experienced person who understands the fundamentals of grass-roots mobilization, rather than a beginner who is willing to “try their luck.”

Party activity has always been voluntary, and as a result, loyalists are usually rewarded for their hard work, long service, and dedication anytime they choose to hold a position in the party in which they have served. It affects people of all political stripes.

This has always served as a source of inspiration for the throngs of people who work day and night to ensure that their political parties gain power.

The current arrangement, in which the highest bidder is frequently rewarded at the expense of individuals who have spent their entire lives serving any political party, undermines structures and discourages those who are less fortunate from sacrificing for their party.

The time will soon be here for the NDC to elect new leaders to guide the party’s affairs.

The national vice chairmanship is one of the most important of these key positions. Delegates must now decide whether to reward loyalty, long service, and dedication or to reward the highest bidder.

With the greatest of respect, I would like to use this medium to appeal to all delegates to prioritize the party’s supremacy by rewarding loyalty, long service, and dedication.

Anyone voted into office shall serve and go but the party will be there forever.

As one of Jerry John Rawlings’ Trainees, Alhaji Said Sinare does not wait for elections to do good to Party Members and the Party, and he understands the political dynamics of this country very well.

Apart from being a man of strong principles and sound judgment, Alhaji Said Sinare believes in the party’s first agenda and is not the type of person the current administration can bribe with money to the detriment of the people.

From the South to the North, East to West, everyone has agreed that Sinare has remained the most Loyal, Dedicated, and Tolerant to our party’s course over the years. This is a quality that a good leader possesses.

Alhaji Said Sinare is also known for being humble, friendly, and accessible to the party’s grassroots. As a result, he is aware of the worries and feelings of both party members and the thronging grassroots.

This is the person who places high importance on honesty, integrity, and loyalty.

Indeed, if we are to win the general election in 2024, we must retain the fearless Alhaji Said Sinare, who can compete with the NPP in Zongos across the country.