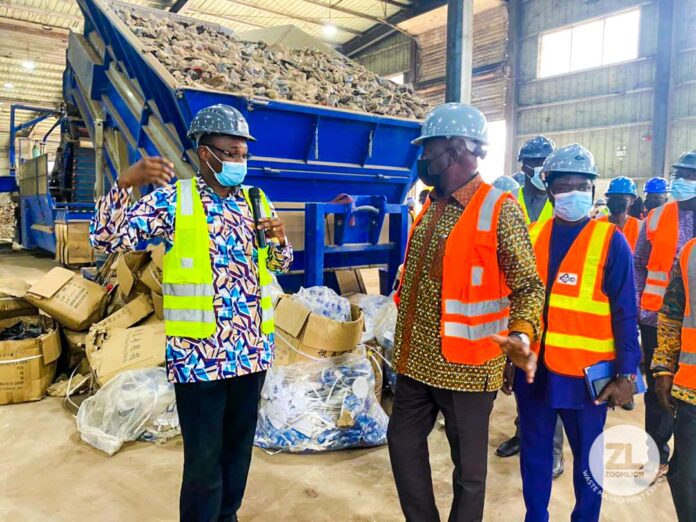 The Ministry of Local Government, Decentralisation and Rural Development (MLGDRD) has expressed satisfaction with the operations of the Kumasi Compost and Recycling Plant (KCARP) which also hosts the Kumasi Wastewater Treatment Plant at Adagya in the Bosomtwe District in the Ashanti Region.

According to the sector minister Dan Kwaku Botwe, based on that satisfaction, the government will continue to collaborate with the Jospong Group Companies (JGC) to make sure its operations benefit Ghanaians.

Mr. Botwe made the observation when he led a delegation of directors from his outfit to pay a working visit to the KCARP on Friday, March 25, 2022.

The visit afforded the minister and his team the opportunity to familiarise themselves with the operations of both KCARP and the wastewater treatment plant.

Mr. Botwe explained that it also formed part of his ministry’s monitoring of JGC operations, particularly in the light of the fact that the government has an agreement with the group.

“For 2015, the Kumasi Compost and Recycling Plant and 2012, for the Accra Compost and Recycling Plant, the Ministry of Local Government Decentralisation and Rural Development we have a Management Service Agreement with this organisation (the JGC), and before any agreement is done, we continuously monitor what they do to make sure that they are living up to the agreement that we have with them,” he said.

He was particularly impressed by the ongoing expansion works at the KCARP, stressing that it will help cater for the growing waste in the Greater Kumasi Area.

These ongoing expansion works at KCARP, he intimated, will definitely affect the 2015 Waste Management Service Agreement between the government and KCARP.

“…So, we felt that it was very necessary for us to come here to have a first feel of what is happening. And our staff, of course, keep on monitoring the agreement we have with the Composts both in Kumasi and Accra,” he further said.

Mr Botwe gave the assurance that his team will follow up with another visit to the plant to have a more detailed discussion with the JGC for review and areas of improvement so far as the agreement was concerned.

He averred that his ministry will always ensure value for money in contracts such as this.

He disclosed that the MLGDRD will also be visiting the Accra Compost and Recycling Plant soon.

Continuing, Mr. Botwe indicated his resolve to ensure that Parks and Gardens which is currently under his ministry collaborates with JGC to help the state agency green the country using compost materials and fertilisers produced by the compost plants in both Accra and Kumasi.

“…And you would have taken notice of the fact that early this year, we doing everything to revamp Parks and Gardens: we gave them brand new trucks, water tankers, mowers, and other things. I am aware that Jospong Group of Companies gave them some water tankers some time ago, out of their corporate social responsibility,” he said.

Furthermore, he pointed out that the Ministry of Local Government Decentralisation and Rural Development was looking at ways of encouraging Ghanaians to have gardens and grass in their environs.

The Executive Chairman of JGC, Dr. Joseph Siaw Agyepong, contended that his group has had a “very good relationship with the Ministry of Local Government, Decentralisation and Rural Development, adding that the ministry has been very supportive.

In this regard, he commended Hon. Botwe, for taking time off his tight schedules to visit the KCARP.

Such visits, he noted, help spur them on to do more in a professional way.

Again, Dr Siaw Agyepong said the KCARP was also an academic facility that takes in students from the Kumasi University of Science and Technology (KNUST).

“We have about 4 lecture halls at KCARP that are often used by student interns from KNUST and also for practical knowledge,” he revealed.

Earlier, the General Manager of KCARP, Samuel Ntumy, conducted Hon. Botwe and his team around the two treatment plants.

KCARP, he said, has the capacity to receive 1,200 tons of solid waste, adding that when its expansion works are completed, the plant will be able to take in another 1,200 tons of waste making 2,400 tons in total.

He was full of praise for Asantehene, Otumfuo Osei Tutu II, who he said was magnanimous to give them land to construct the plants.

He said KCARP and the Kumasi Wastewater Treatment Plant, which receive 1,200 tons of solid waste and 1,000 tons of liquid waste respectively were the first of their kind in Africa.