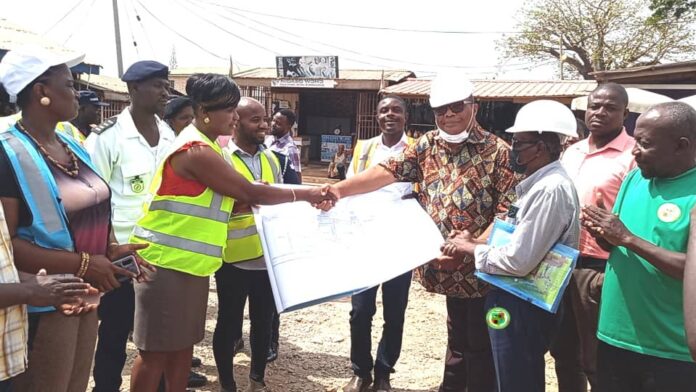 The Abokobi Lorry station is set to be transformed into a modern one to befit the status of Abokobi as the Municipal Capital.

This was disclosed by the Municipal Chief Executive (MCE), Hon. Elizabeth Kaakie Mann, when she handed over the site, along with the drawings, to the contractor at the station on Tuesday, 5th April, 2022.

The project forms part of the plans by the Assembly to give the Abokobi township a facelift befitting of it’s status as the Capital.

A week ago, the Hon. MCE symbolically broke ground and handed over the site for the rehabilitation of the town roads.

To complement this, the Assembly is using part of its share of the District Assemblies Common Fund (DACF) to construct a modern transport terminal which is expected to be completed within four (4) calendar months.

Handing over the site to the contractor, Hon. Elizabeth Kaakie Mann said the Assembly is committed at ensuring Abokobi lives up to its status as the Municipal Capital, noting that the current state of the station is not good for the image of the community.

“This is one of the projects we’re using our share of the District Assemblies Common Fund (DACF) RFG to do for our people. The Abokobi Station is an eyesaw and needs to be fixed. The place floods and becomes muddy when it rains so we saw the need to upgrade it into a modern one”, she stated.

She appealed to all the stakeholders, especially the trasport operators and traders in and around the station to cooperate with the contractor to ensure a successful execution of the project.

The Municipal Works Engineer (MWE) indicated that some of shops around the station will be affected but gave assurance that they will be helped to relocate in order for the project to go on, urging them to cooperate with and support the Assembly to construct the terminal to ehance their work.

Speaking for the Company, VAPPY Construction Limited, Mr. Victor Kumodzie, pledged to deliver quality and lasting work as it has done in other areas and requested for the cooperation of all the relevant stakeholders to enable them finish within the scheduled duration.

Leadership of the transport unions at the station expressed delight at the commencement of the project and gave assurance of their unflinching support and cooperation.

The Municipal Coordinating Director (MCD), Mrs. Vera Akuffo-Mante, Assembly Member for Abokobi, Hon. Moses Ola Dowuona, and the Chairman for the Abokobi Zonal Council, Hon. Emmanuel Tettey Odai, were among the officials at handing over ceremony.