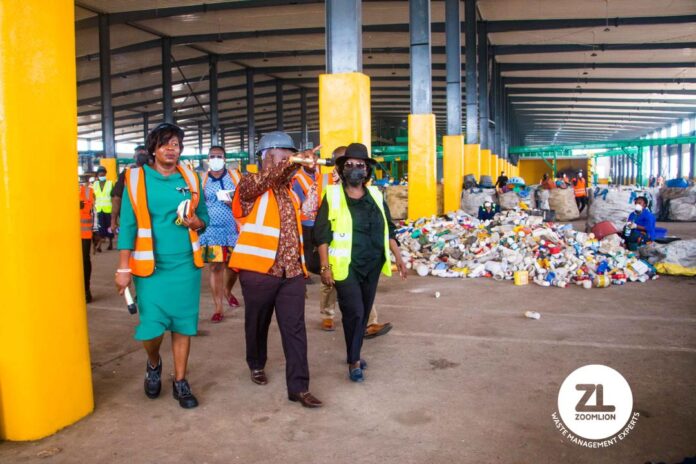 The Jospong Group of Companies (JGC) has been charged to lead in the energy to waste sector also known as green energy.

The Minister of Sanitation and Water Resources, Madam Cecilia Abena Dapaah, who made the call on Thursday, April 7, 2022, following an inspection tour of the Accra Compost and Recycling Plant (ACARP) at Adjen-Kotoku in the Ga West Municipality, Greater Accra, assured that the government was ready to support any private entity that will venture into the green energy space.

According to her, though investing in the waste to energy space was capital intensive, she was confident JGC, with its track record, would be able to marshall the needed resources to undertake such a project.

In this vein, she commended the JGC for its continuous ‘huge investment” in the water and sanitation space.

That, she said, was evident in the group’s completed and ongoing waste management projects across the country.

“We will continue to encourage and support them [JGC] to grow higher,” she assured.

After being conducted around the plant by the General Manager (GM) of ACARP, Mr. Michael Padi Tuwor, Madam Dapaah expressed her satisfaction with operations at the facility.

“I am very impressed with operations at ACARP because they have lived up to expectation,” she gladly expressed.

For the Ministry of Sanitation and Water Resources (MSWR), she emphasised that it was crucial that there were projects like ACARP to help add value to waste in the country.

“Where would we have put the 7,149,922 tons of waste Ghana generates yearly if there were no projects like ACARP”? she quizzed.

Against this background, Madam Dapaah praised members of the Environmental Service Providers Association (ESPA) for their contributions towards waste management.

She also used the opportunity to encourage Ghanaians to cultivate the habit of waste separation first in the homes.

“The country must also wean itself from open defecation, and desist from the practice of including solid waste to faecal sludge,” she advised.

She indicated that her ministry was consciously sensitising Ghanaians on the need to bury organic materials for compost and ensure that inorganic materials were transported to transfer stations and facilities such as ACARP.

“Our doors are still open for proposals and ideas,” she said.

The minister lauded President Nana Addo Dankwa Akufo-Addo for his vision to ensure a clean Ghana.

“We must continue to pray for the President for his empathy in providing Ghanaians with free water for 15 months which helped save lives during the early months of the Covid,” she said.

She described the Executive Chairman of JGC, Dr. Joseph Siaw Agyepong, as a man with a “soft ear” to proposals and ideas.

“He also believes in women, a risk-taker and has the can-do spirit which makes a lot of impact,” she said.

The GM of ACARP, Mr. Michael Padi Tuwor, thanked Madam Dapaah and her team for the visit.

He assured that the company will continue to contribute its quota towards managing and adding value to waste.