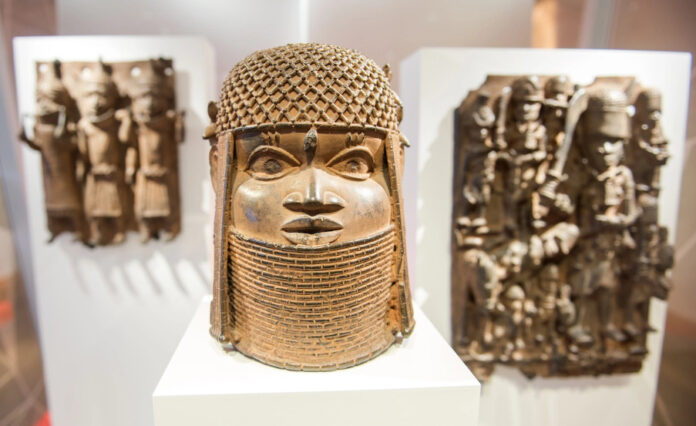 German Foreign Minister Annalena Baerbock is set to travel to Nigeria to personally hand back the first items from the precious Benin bronzes looted by colonial powers in the 19th century.

More than 1,100 of the works from the palace of the then kingdom of Benin, which is now part of Nigeria, have so far been held by around 20 German museums. The objects, which are made of ivory and other materials in addition to bronze, mostly come from British looting in 1897.

The spokesperson for the Foreign Office said in Berlin on Friday that the two Green politicians initially wanted to return a total of 20 Benin bronzes from German collections to the Nigerian capital Abuja.

The fact that the restitution could be realized this year was thanks to the good cooperation between the German government, the federal states, cities and museums. It also shows how serious Germany is about coming to terms with its colonial past.

In addition to Roth, Baerbock is expected to be accompanied by Petra Olschowski, minister of art for Baden-Württemberg, and the directors of the five museums that hold the largest collections of Benin Bronzes in Germany. These are the Ethnological Museum Berlin, the Ethnological Museum Dresden/Leipzig, the Museum am Rothenbaum in Hamburg, the Rautenstrauch Joest Museum in Cologne and the Linden Museum in Stuttgart.

Baerbock and Roth will have 10 Benin pieces from Berlin with them, three each from Dresden, Hamburg and Cologne, and one work from Stuttgart.

Among the objects that will be returned is the royal throne stool of Oba Eresoyen from the 18th century. The piece, which weighs around 90 kilograms, was still on display in Berlin’s Humboldt Forum until this week.

In the summer, the government in Berlin signed a memorandum of understanding with Nigeria for the transfer of ownership of the objects from German museums.

Since then, the respective sponsors of the museums have been negotiating with the responsible authorities in Nigeria. The museums in Berlin, Hamburg, Cologne and Stuttgart have already transferred ownership of the holdings to the Nigerian side.

This is not only about direct restitution. The four agreements concluded so far also regulate in each case how many and which of the art treasures can remain on loan in Germany or be exchanged again.

Of the 514 bronzes in Berlin so far, 168 are to remain on long-term loan in the Ethnological Museum’s depot and be shown alternately in the Humboldt Forum. Such arrangements have also been agreed for the other museums.

Hermann Parzinger, president of the Prussian Cultural Heritage Foundation, to which the Berlin museum belongs, spoke of a “model case.”

“Something new has really emerged from this transfer of ownership: close cooperation, a new relationship with Nigeria, with the global South as a whole,” he said when removing the throne stool. He said the first restitutions this year are also important for the Nigerian partners.

Nigeria is about two and a half times the size of Germany and, with about 220 million inhabitants, the most populous and economically strongest country in Africa. The most important economic sector is oil production.

The Islamist terrorist militia Boko Haram and the group Islamic State Province of West Africa are responsible for serious attacks in the country with numerous fatalities.

ALSO READ  Frank Acheampong plays 90 minutes for Shengzhen in an all-square encounter with Changchun
AMA GHANA is not responsible for the reportage or opinions of contributors published on the website.