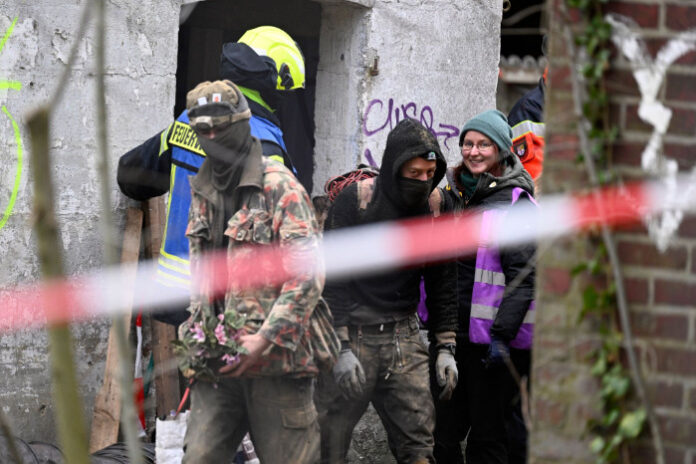 The energy company RWE wants to excavate the coal lying under Luetzerath – for this purpose, the hamlet on the territory of the city of Erkelenz at the opencast lignite mine Garzweiler II is to be demolished.

The final two climate activists left a tunnel they had occupied in the contested German mining village of Lützerath on Monday, according to a dpa reporter at the scene, five days after police began a clearing operation.

The eviction of the village, in the western German state of North Rhine Westphalia, can now be considered virtually complete. On Sunday the police said that only the two activists in the tunnel remained.

On Thursday, a video of two hooded men posted on YouTube, which has been verified by police, caused a stir. In it, activists under the names “Pinky” and “Brain” claimed to be in the tunnel under Lützerath.

The village, which has long been cleared of residents and is now owned by energy company RWE, is due to be demolished to make way for lignite mining.

The energy company RWE stressed that the two activists who had held out under Lützerath had left the tunnel voluntarily. They were “relieved” that the “life-threatening situation” had ended in this way, avoiding “high risks,” the firm said.

The activists also said on Twitter that the two people had left the tunnel “by themselves.” “A thousand thanks for your life-threatening commitment against lignite & capitalism,” they wrote.

ALSO READ  COP26 Glasgow: How public and private finance can lead the transition to a net-zero, climate-resilient world

“With burning barricades, a tunnel in danger of collapsing and rickety tree houses at great heights, activists have not only put themselves in great danger, but also the emergency forces,” the Social Democrat (SPD) politician wrote in a statement on Monday.

Political conflicts should not be carried out on the backs of the emergency services, she said. “Those who want to force their concerns with violence are exiting democratic discourse,” Faeser said.

At the same time, Faeser said that the “individual accusations of violence by police officers” against activists would be investigated and would have consequences, if confirmed.

Activists accused the police of excessive violence at the large demonstration held on the outskirts of Lützerath and involving well-known climate activist Greta Thunberg on Saturday.

A spokesperson for the demonstrators’ ambulance service said on Sunday that a “high double-digit to triple-digit number” of participants had been injured, some seriously and with life-threatening injuries.

Spokespeople for the activist group “Lützerath lebt,”,or “Lützerath Lives,” estimated the number of injured demonstrators on Saturday to be between 90 and 120. Police said nine activists were taken to hospital by the ambulance.

The number of injured since the beginning of the eviction on January 8 was estimated at around 300, though the spokesperson for Lützerath Lives said these were estimates.

Mining firm RWE expects the final demolition of the remnants of the small village to take about eight to 10 days and that excavators could begin digging out the lignite beneath in March or April.

The end of the clearance of Lützerath sparked further outrage and protests across the region, however.

On Monday morning, eight activists occupied a lignite excavator in the open-cast mine of Hambach, 20 kilometres from Lützerath. The machine temporarily stopped its operation, though the protest dissipated soon after.

Moreover, around 4 kilometres from Lützerath, five climate activists – two of them in wheelchairs – abseiled from a motorway bridge on Monday morning.

The action, which also ended several hours later, stopped traffic on a nearby country road, though cars continued to drive across the motorway.