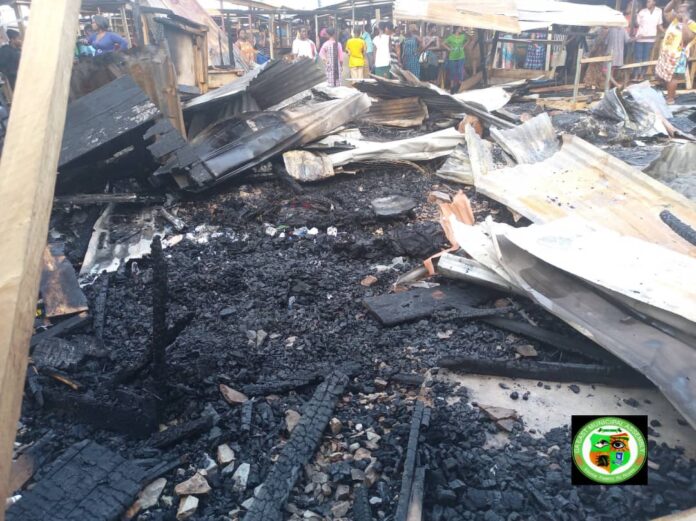 But for the timely response of the Ghana National Fire Service (GNFS), Madina Station, the Kwabenya-Atomic Market would have been completely consumed by fire on Sunday dawn as they averted a looming major disaster when a small part of the market caught fire.

The fire, believed to have started around 2:18 a. m on Sunday, 10th January, 2021, was put out within a short time upon the arrival of personnel from the Madina Fire Station following a call by the Ga East Municipal Assembly Guards on duty in the market.

Though the cause of the fire is yet to be established, authorities suspect arson following recent alleged threats of burning the market by some persons who claim to be the owners of the land on which the market is situated.

About 34 sheds and 136 tables are estimated to have been affected by the fire outbreak with all items and storage facilities within that section of the market burnt completely.

Officials from the Assembly, led by the Municipal Chief Executive (MCE), Hon. Janet Tulasi Mensah, with the Presiding Member (PM), Hon. Jesse Nii Noi Anum, Municipal Coordinating Director (MCD), Mr. Matthew Tay, and Municipal Works Engineer (MWE), Peter Bah-Lano, among others, visited the scene of the fire outbreak to assess the situation and take relevant information on it and the affected persons.

According to Assistant Divisional Officer Two (ADO2) Michael Kumi of the Madina Fire Station, the fire was very intense but they managed to quench it within a short time and avoided further spread.

An inspection of the market by the Hon. MCE and her entourage, NADMO and Police teams revealed others spots belueved to have been mapped out by the suspected arsonists to carry out their nefarious intents of burning the entire market.

Hon. Janet Tulasi Mensah later addressed the traders in the market and expressed her condolence, on behalf of the Assembly and the Member of Parliament (MP) for Dome-Kwabenya Constituency, Hon. Sarah Adwoa Safo.

She told the traders that the Assembly will liaise with the security agencies to ensure that the perpetrators of the crime are found and brought to book.

She assured the affected traders that the necessary steps would be taken to provide them with the needed support in the interim to sustain their livelihoods while promising of urgent security arrangements to boost the existing situation in the market.

The Hon. MCE, giving a brief background of the market, told the traders that the market was part of the land acquired by the Government of Ghana from the allodial owners through an Executive Instrument (EI) for use by the Ghana Atomic Energy Commission (GEAC)

She said the Assembly approached GAEC for a parcel of land to create a new market to accommodate traders from the Kwabenya Satellite Market in adherence to the Social Distancing protocol as part of the COVID-19 preventive measures directed by the Government and urged them to disregard any claims of ownership by some individuals and groups of persons.

In an interview with the media, Hon. Janet Tulasi Mensah stated that the Government and the Assembly envision to build an ultra-modern market facility and that the necessary documentations are nearing completion and the actual project would soon start and appealed to the traders to exercise patience and urged the other stakeholders to cooperate with and support the Assembly to execute this great agenda.

“I wish to appeal to the traders to keep calm and not leave the market because of the challenges they face because the construction of the market is a gradual process. I also want to appeal to those claiming to own and the land and are encroaching on it to desist from it because this a Government land”, she said.

“The Assembly is in charge of this market (and all others in the municipality). We are seriously working on the drawings to construct an ultra-modern market here at Kwabenya and we have to meet with the investors to agree on the designs and all arrangements and then engage the vatious stakeholders which include the traditional authorities. We need their support and cooperation because it is a collective work”, she further stated.