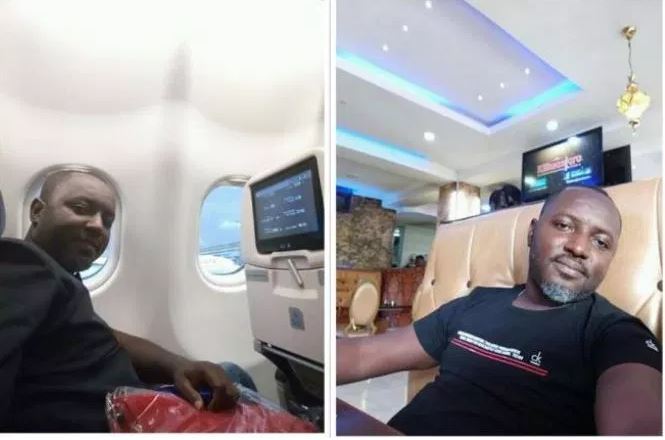 The wheels of justice turn slowly, but grind exceedingly perfect! Time has apparently catch-up with self-styled Kumasi pastor, who has mastered the craft of duping unsuspecting young Ghanaians in an extraordinary visa fraud.

The Kumasi-based pastor, who has been described in some circles as an embodiment of impudence and profoundly immoral, usually parades himself as Prophet and Reverend Minister, even though he has not seen the four corners of
any Theology School or undertaken any pastoral apprenticeship programme in his entire life.

The Ghanaian ‘con man’ who goes by the name Rev Samuel Amankwah, aka ‘Ditodito’, our checks revealed, makes lofty promises to his clients, including securing them lucrative jobs and accommodation in the Caribbean just to extort huge amount of money from them.

Rev ‘Ditodito’ operates his illegal travelling agency from the Baba Yara Sports stadium in Kumasi with the able assistance of some young men, who often go out to lure prospective clients.

The self-acclaimed ‘man of God’ takes seat of dishonor wearing white clerical and issues fake electronic visas with the help of his fraudulently trained travel agents who are spread across both Kumasi and Accra.

According to our investigations, what is even frightening is that, young Ghanaians who are looking for travel opportunities abroad are his cash cows, as he tricks them with fake Turks and Caicos visas with attached flight tickets and dupe them with various sums of cash between GH¢10,000 to GH¢35,000 depending on how well his
trained agents are able to lure them.

Some of the fake Turks and Caicos visas issued by Rev Amankwah and his agents at the cost of GHC10,000

A number of young Ghanaians who have fallen victim to Rev Amankwah’s dubious and fraudulent visa activities who got in touch with this journalist shared their terrifying stories on how they have lost fortunes to the Kumasi based pastor after promising to secure them with visas, and subsequently send them to Turks and Caicos in the Caribbean for job opportunities.

Some of the victims namely, Mavis Aborah, Isaac Duah, Azuma Awuni, Enock Asiamah, Kwame Appiah, Edmund Abrokwah, Samid, Awal, Addae and host of others narrating their ordeal revealed that the ‘con man’ operates with the help of
numerous agents (middle-men), including one Patrick Mensah, Frank Osei Tutu and one Martha Boatemah, together with her husband who poses as key travel agents.

Patrick Mensah, one of Rev Amankwah’s accomplices has currently gone on a hideout

Another key person who has fraudulently aided Rev Amankwah and his agents in perpetuating all these criminal activities in Kumasi and beyond has so far been identified as one Daniel, who mostly acts as office secretary at his Kumasi office.

One of the victims, Enock Asiamah, who has lost all hope after losing in excess of GH¢24,000 to the ‘fraud man’ and his agents disclosed that although he has lodged an official complaint at the national police headquarters in Accra, Rev Amankwah has failed to show up for questioning after being invited by the police.

Despite the several complaints lodged against him, Rev Amankwah is still roaming the streets of Kumasi as a free man.

“We have lost so much money to this fake pastor and his agents. And if the police don’t act by arresting him after all the complaints against him, we will be forced to arrest him ourselves. As I speak to you right now Rev Amankwah is walking about flexing his muscles in Kumasi enjoying our hard earned money,” Kwame Appiah fumed.

The victim who was visibly angry also revealed that Rev Amankwah and his agents after issuing the electronic visa at the cost of GH¢10,000, which has now turned out to be fake, go further to demand for extra cash between GH¢7,000 to GH¢12,000 claiming plane tickets to Turks and Caicos in the Caribbean are expensive.

What is even humiliating, according to the victims, is that Rev Amankwah and his agents made them believed that they were going to embark on their journeys just in a matter of weeks after paying their respective fees, which they say forced many of them to borrow from friends and also sold their personal belongings just to raise enough
funds for the trip.

“I have lost everything; I was running my personal business with my own seed capital. But now, my mother is the one feeding me at this age, all because of this ‘evil man’ and his agents. We have tried everything possible to retrieve our moneys but now he doesn’t even pick our calls. We even hear he’s trying to run out of the country. But as for me, whatever I need to do both physically and spiritually to get my money back I will do if the police fail to arrest this man ,” Isaac Duah vowed in his anger.

Meanwhile, further information available to us indicates that one of Rev Amankwah’s key accomplices who acts as travel agent in both Kumasi and Accra, Frank Osei Tutu has collected huge sums of cash as visa fees as well as moneys to cover plane tickets from over ten victims and has sneaked out of the country to Canada upon sensing danger.

ALSO READ  Kevin Cole returns with brand new single “Middle of The Summer”
AMA GHANA is not responsible for the reportage or opinions of contributors published on the website.