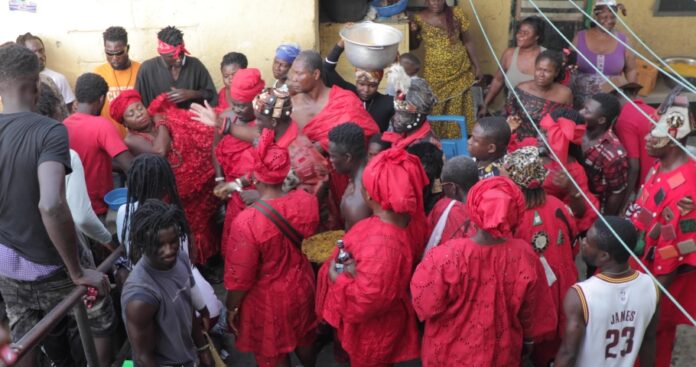 Some chiefs in the Greater Accra Region have threatened to demonstrate against the government over expropriating of their ancestral lands by political appointees.

The aggrieved chiefs threatened endless protest to ask the government to immediately ensure a successful handing over of lands released to them last year which some appointees of the NPP government are fighting so hard to grab for their selfish interest.

They claim the 40% of the defunct dairy farm land that was released to them on the instruction of the president some months ago has not been handed over to them for no apparent reason, and that, those behind this anomalies have hatched a well-rehearsed plan to intimidate them and take over the property at the blind side of the President who issued the directive for the release.

They said all efforts to have the lands released to the owners have not yielded results.

“We would like to also inform you that plans are being put in place with other neighboring communities facing similar challenges to embark on an endless demonstration to protect our territorial integrity,” they disclosed to The Citizen Newspaper on Tuesday”

“We shall communicate the date for the commencement of this demonstration to you and other media houses in the Country, including international media houses that care about our predicament as soon as possible.

What it takes to embark on such exercise is to notify the police but not seek their permission; and that, we shall certainly do,” the chiefs noted, adding, as it stands now, we don’t need police protection on this matter because, they are tools in the hand of political appointees. During the height of COVID 19, there were massive political rallies; and we did not forget the recent funeral of their very own, Sir John. This government cannot hide behind the COVID19 to gag us,” they averred.

According to them, land grabbing and the making of an authoritarian populist regime in this country is alarming.

The phenomenon, they claim, remains out of the public purview and meets little resistance as the regime-controlled media keeps Ghanaians distracted and mute over the dangers these acts of political appointees and their appendages at Lands Commission could possibly cause the security and progress of the state.

“Therefore, it’s about time we voiced out our displeasure for the whole world to hear us before we fashion out our next line of action,” they promised.

They accused some big wigs of the present regime of hiding under the cover of the Ministry of Works and Housing to expropriate lands released to them so they could share among themselves without the knowledge of the president, who, out of clear understanding of the reality on the ground, instructed stakeholders to see to a successful release of the land but the greedy ones still want to create chaos.

They are however calling on all communities that make up Ga State to come out in their numbers and lend their support when the need arises to halt the manipulative tactics of political appointees.