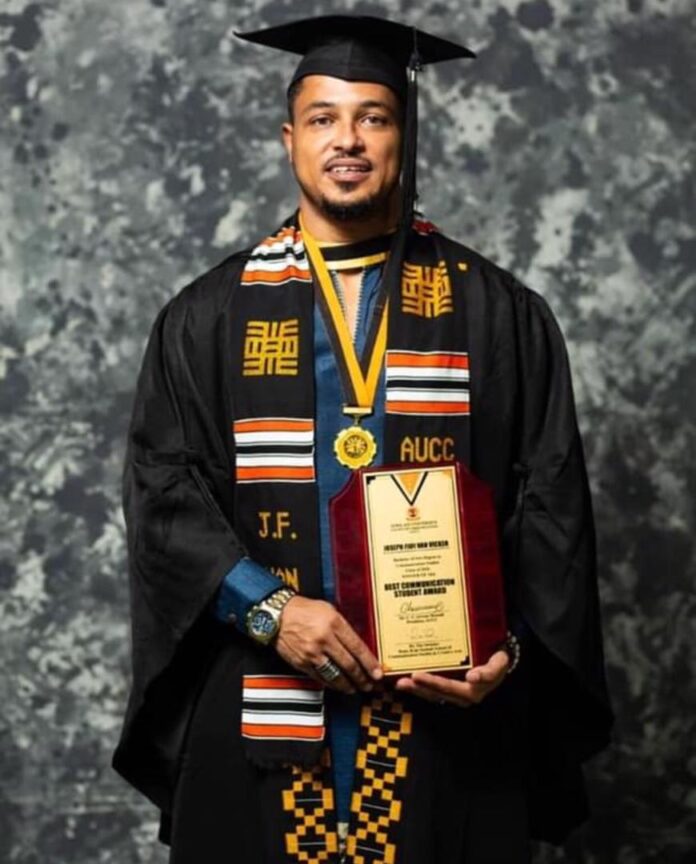 One of Ghana’s celebrated actors, Joseph Fiifi Van Vicker was over the weekend bestowed awards in recognition of his sterling academic achievement at the just ended 17th Congregation ceremony of the African University College of Communications, AUCC.

This year’s graduation ceremony which was supposed to take place last year but delayed due to COVID protocols and restrictions was held at the forecourt of the school on the theme: “Negotiating a Pandemic, The New Normal For Business And Communication”.

The highly attended event saw Two Hundred and Seventy-Three (273) students graduating with various honors from the Kojo Yankah School of Communication Studies with a Hundred and Nine (109) receiving honors in specialised courses from the Sam E. Jonah School of Business.

Among the graduands were some celebrated movie icons including, Van Vicker and Victoria Lebene, the wife of renowned writer and blogger Nkonkonsa.

Actor and entrepreneur, Van Victor stole the show when he bagged two other academic laurels after receiving first class honors in Bachelor of Arts Degree in Strategic Communication.

This happens to be his degree many years after completion of his secondary education. Achieving this enviable academic feat was a dream come true when the actor and movie producer took to social media to share some interesting stories on his academic journey chauffeured with hurdles and how he was able to make it this far despite the challenges.

In his emotional social media piece, Van Vicker lamented how he could not enrol into university in 1997 due to financial difficulties especially when his mother was unable to cater for his education. However, with perseverance and determination, he has been able to cross the finish line by getting his first degree at AUCC after 21 years.

Born to a Ghanaian-Liberian mother and a Dutch father who passed-on when he was six, Van Vicker hopes to complete his Master’s Degree in December to add to his academic laurels.

Among the first class awardees include the immediate past SRC President, Samuel Kofi Yeboah, otherwise known as “Barrister” and Lydia Nyame from the Communication School who equally bagged the Best Student in Journalism.

Speaking to the GBCs Isaac Asare, Mr Kofi-Yeboah, his vision was to be a transformational student leader and to attain first class. According to him, being an SRC President did not distract his ambition to achieve academic laurels, an indication that as student leader, you can serve diligently and still do well in academics.

“I say this to encourage student leaders that we can still serve our people yet do well in our academic. Don’t feel threatened to negotiate well for your people because you are scared of your grades” he indicated.

He expressed sincere gratitude to the entire student body for their invaluable support and the confidence reposed in him during his administration.

For the records, AUCC was adjudged the best private university in communication school at the Private Universities Students Association, PUSAG, Awards held at the National Theatre.

The school offers unique courses in communication studies including visual communication and masters programmes which undoubtedly put them ahead of other institutions.

That said, AUCC is highly determined to actualised its vision of becoming the most preferred higher learning destination in Africa and beyond.