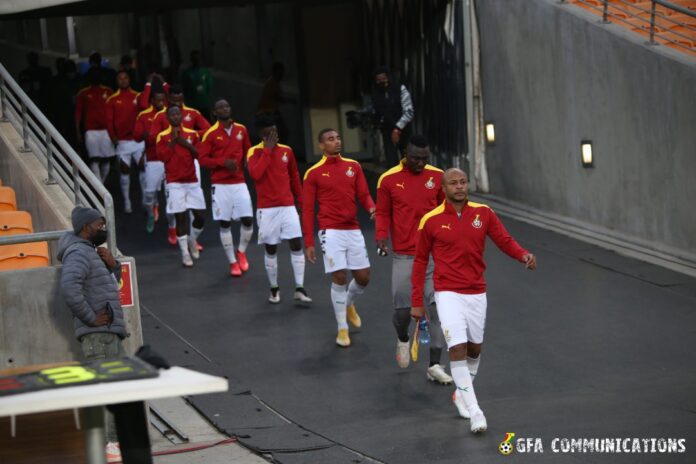 The host scored a late goal against Ghana in the second game at the FNB Stadium in Johannesburg.

The Black Stars had six changes in their squad that defeated Ethiopia 1-0 in the opening game on Friday at the Cape Coast Sports.

Hearts of Oak captain Fatawu Mohammed was handed a starting berth to replace Andy Yiadom in defence while Jonathan Mensah was also picked ahead of Asante Kotoko defender Abdul Ganiu to replace Leicester City defender Daniel Amartey who did not travel with the team.

Yaw Yeboah also came in for injured Jeffrey Schlupp in midfield to partner Wakaso Mubarak and Emmanuel Lomotey who surprisingly started ahead of Baba Iddrisu of Real Mallorca fame.

Ghana started the game on a bright note as they surged forward to look for the opener.

Wakaso Mubarak tried a long ranger by the third minute but the South Africa goalkeeper easily dealt with it.

On the 31st minute, South Africa nearly opened the scoring through Mokoena. The midfielder’s free-kick was spilled by goalkeeper Richard Ofori but the rebound was wasted.

Fameye was lucky not to have been given a red card after his rushing tackle in Mokoena. The former Asokwa Deportivo man was only cautioned with a yellow card.

South Africa were denied the opener by the 37th minute after Percy Tau connected a tailor-measured cross which went past goalkeeper Ofori but the referee ruled it as offside.

After the break, Ofori made another mistake but Percy Tau couldn’t punish him once again.

South Africa finally had the open by the 83rd minute through Bongokuhle Hlongwane.

Ghana pushed men upfront in search of the equaliser but it was too late for Akonnor’s men who rarely created a chance.

Ghana will host Zimbabwe next month at the Cape Coast Sports Stadium.