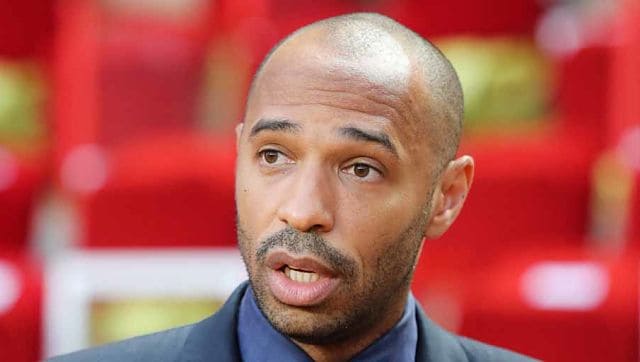 Arsenal legend, Thierry Henry has descended on Jordan Ayew following his miss against Brighton and Hove Albion on Monday.

Palace hosted Brighton at the Selhurst Park in the Premier League and were hoping to record their second home win.

The Eagles were 1-0 with a minute to end the first half with a spot-kick by Wilfred Zaha.

However, Jordan’s miss proved costly as Brighton snatched a late equaliser, thanks to a cool finish from Neal Maupay to end the game 1-1.

Henry, who scored 175 Premier League goals and won multiple league titles with Arsenal, criticised the 29-year-old for his missed chance.

“That’s the better option. You score, I come and celebrate with you – we do some somersault or whatever you want, we slide on our knees,” the ex-France international said on Sky Sports.

“If you don’t score, I would have killed you. Give me the ball….that is a sure goal. In that position, I’m thinking Benteke.

“This is where, in the Premier League, that’s a 2-0. Yes, he could have scored. But what about this [passing to Benteke], that’s 2-0 and we’re not talking anymore,” he added.

Ayew has been struggling form in recent months, having scored just a single goal in the Premier League last season and is yet to find the net in six matches this season.

He has been named in Ghana’s 32-man provisional squad for the 2022 Fifa World Cup doubleheader against Zimbabwe next month.

ALSO READ  Premier League: Can anyone dethrone Manchester City?
AMA GHANA is not responsible for the reportage or opinions of contributors published on the website.