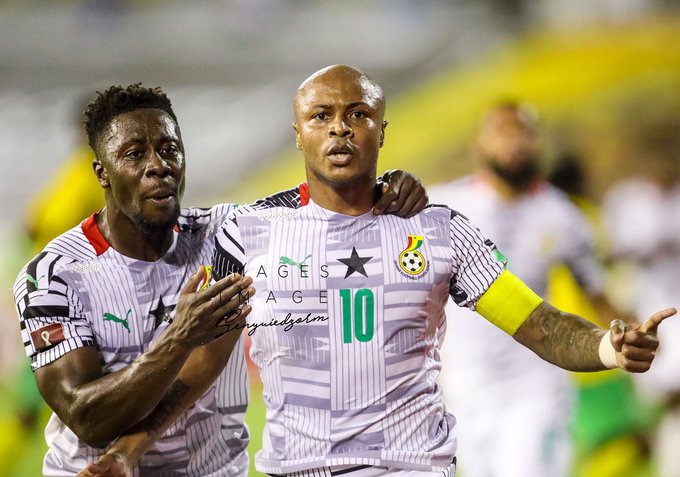 On the day he was completing his century of matches in the colours of the Ghanaian national team, captain Andre Ayew scored the game’s only goal as the Black Stars beat South Africa 1-0 to progress to the play-off round of the qualifiers for the Qatar 2022 FIFA World Cup.

The result at the Cape Coast Stadium meant both sides finish the group phase with 13 points. They had to be separated by the finest of margins, Ghana going through to the next round by virtue of having scored seven goals, one more than second-placed South Africa.

The home side knew nothing short of a win would earn them a chance to vie for a place in Qatar and were off to a positive start. They were however pegged back in the 12th minute when star midfielder Mohamed Kudus had to come out and was replaced by Daniel-Kofi Kyereh.

Still, the home side gave in a push. Jordan Ayew had a good chance in the 14th minute when he stormed his way into the box from the right but his shot was deflected for a corner.

Two-minute slater substitute Kyereh had a good chance when he ran into the box from the left, but his powerful shot was over the bar.

Ultimately, Ghana got into the lead in the 31st minute when the older Ayew converted from the penalty spot after Daniel Amartey was fouled inside the box.

In the second half, it was South Africa who had the chances. Percy Tau had two successive opportunities, first his freekick from range going straight into the keeper’s arms while he also had a shot from the edge of the area saved by the shot-stopper.

Despite concerted efforts, Ghana defended with their lives to keep the score and earn a ticket to the next round.

Meanwhile in Thies, already qualified Senegal finished the group phase with an unbeaten record after defeating Congo 2-0 courtesy of a pair of goals from Ismaila Sarr.

The Watford FC striker broke the deadlock with a ferocious shot in the 14th minute before tapping home for the second 10 minutes later.

Senegal finish the group round with 16 points, their only blemish being last week’s draw with Togo.