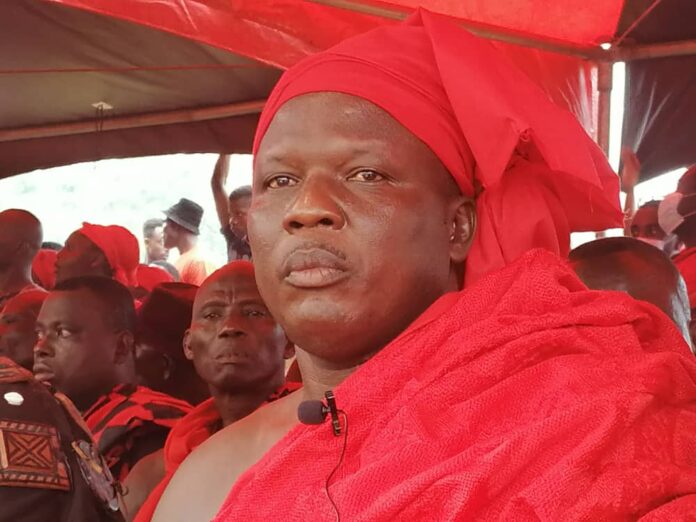 Newly enstoolled Konor (Paramount Chief) of the Agotime Traditional Area in the Volta Region – Nene Nuer Keteku IV, has called on all indigenes of the area to bury their differences and unite for the sake of the peace and development of the area.

According to him, the socio-economic development of the Agotime Traditional Area is a daunting task that requires the involvement of all stakeholders.

The ceremony dubbed “Tudada” (Firing of muskets) by the Agotime State also witnessed a procession of all Divisional chiefs of the traditional area on the principal streets of Kpetoe, dancing and drumming by Asafo groups, and the swearing of allegiance to the stool by other chiefs amidst a colourful ceremony.

In his first-ever public speech after his earlier installation about a week ago, the new Konor said he is bringing on board a sincere, dynamic, and result-oriented leadership based on a consultative team-building process that would require the participation of every member of the traditional area.

He noted that the Agotime Traditional Area is confronted with enormous challenges and that posterity will not forgive any individual or groups of people who would want to thwart genuine efforts aimed at resolving these challenges, insisting that “the current generation has no justification to fail the future generations”.

Nene Nuer Keteku IV said he will make unity and development of the area his primary focus and called for the support of all indigenes in the interest of Agotime.

“When I look at our challenges I can’t help but be disciplined, strategic, and fruitful in order to surmount them,” he said, adding that he and his council of elders are committed to putting peace and unity first in all affairs of the state.

Further, he promised an open-door leadership where everyone in the traditional area – young and old, men and women, believers and non-believers would have a say in their own leadership responsibilities.

The new Konor called on all to support him in his bid to see a happy and prosperous Agotime.