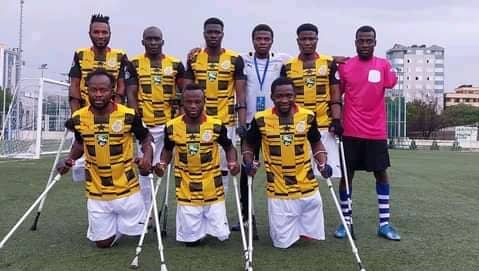 The mysterious Black Challenge, the national Amputee Team of Ghana, needed two first-half goals by Yussif Yahaya and Hamza Mohammed, as well as one by Mubarik Mohammed in the second half, to secure their valuable three points to top the group.

Youssif Yahaya scored the first goal in the 18th minute, with Hamza Mohammed sealing the half with his 22nd-minute goal.

Mubarik Mohammed took the game far away from the Egyptians when he finished off a three-man move from the centre circle into the box of the Egyptians.

The win makes qualification to the next stage easier for Ghana, placed in Group D with Egypt from North Africa and Nigeria from West Africa.

Nigeria play Egypt on Monday, November 29 in the second Group D match, as Ghana takes a rest before playing Egypt on Tuesday, November 30.

The entirely professional team of players based in Turkey, with the goalkeeper from Ghana, mesmerized their Egyptian counterparts with swift dribbles and inter-position play from the beginning to the end but came under some serious attacks from their well-drilled opponents.

They showed their hunger for international competitions with determination and resilience in the face of strong opposition from the Egyptian team.

The Black Challenge managed to put themselves together to represent Ghana to restore their perennially evasive participation in international competition and the joy on their faces after the match was highly expressive of what this tournament meant to them.

Captain for the side, Richard Arthur Opentil is very optimistic the cup would come to Ghana.

“This is the time to make a strong case. We are hopeful the cup would come to Ghana,” he said after the match.

In other matches, Tanzania opened the tournament with a 2-1 win over Morocco, while Sierra Leone beat Uganda 3-0 in Group A.

In Group B, Angola, defending world and African champions, massacred debutants, Zanzibar 12-0 to go tops awaiting their next match with Kenya, who took a rest.

Group C saw Cameroon edging past the Gambia with a 3-2 win as Liberia watched from the stands.

The Cup of African Nations for Amputee Football (CANAF) is the most prestigious tournament on the disability sport in Africa.

This year’s competition has attracted the highest number of nations ever since it started in 2007, with thirteen (13) nations participating.

Ghana remains the first winners, Liberia the highest with three trophies with Angola being the defending champions.