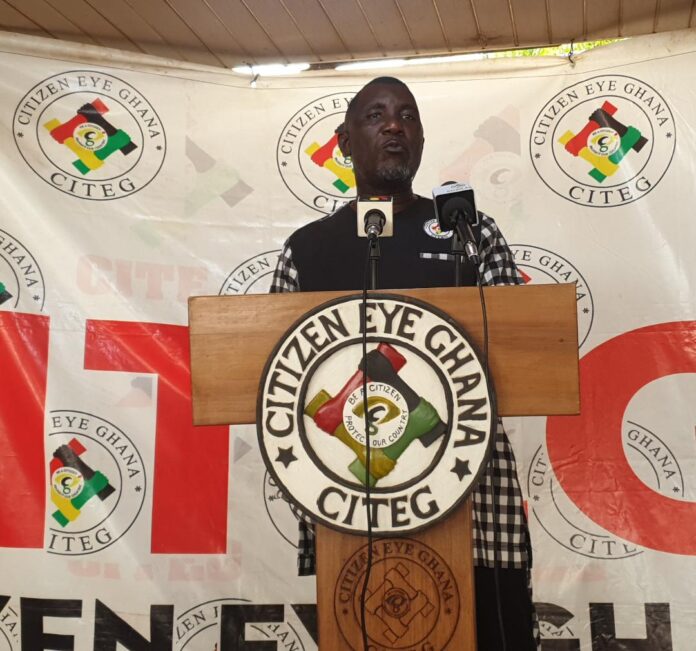 Kojo Danquah and Peter Akwasi Mensah, National Communication Team Members of the opposition NDC clashed with Communicators of the NPP as Nyame Kwame Bempah and Shadrach Appiah, both Communications Coordinator and Public Relations Officer respectively of Citizen Eye Ghana took a neutral position by calling for a reduction in the E-Levy.

The NDC communicators slammed the government for the increase in taxes and petroleum products describing it as cruel and inappropriate.

The NDC team members accused Vice President Dr Mahamud Bawumia of being behind the new set of killer taxes presented during the reading of the 2022 budget before Parliament saying the Bawumia (Digital) Tax of 1.75% on all electronic transactions including Momo Transaction is shameful.

However, the NPP Communicators faulted the NDC for fuel increments in the country saying they need not have the power to do the worse.

Founder of Citizen Eye Ghana (CITEG) Alex Kwaku Tetteh said the 1.75 per cent rate E-Levy was high and called for a reduction.

While faulting the minority over their conduct in rejecting the budget including that of the Speaker, Alban Bagbin in talking down on Finance Minister Ken Ofori-Atta, Mr Tetteh praised Dr Bawumia for his innovative policies including the country’s digitalization drive.

Below is  the full text of the statement by Citizen Eye Ghana;

Citizen Eye Ghana (CITEG) to put on the fore the recent damning act of the Minority Members and Speaker of parliament constitute unconstitutionality and illegality by rejecting the government’s 2022 Budget Statement and Economic Policy read in the House by the Finance Minister, Ken Ofori-Atta, last week. The last time a national budget was rejected was that which was meant for the 1981/1982 fiscal year is one of many issues former Presidential Advisor during the Limann era, Prof Ivan Addae-Mensah wrote about in his book ‘Hilla Limann, scholar, diplomat, statesman.’ This budget was prepared in the wake of the negotiations with the IMF for which the President had been pressing for the fund to be reasonable in its demands and conditionalities.

Citizen Eye Ghana is a non-partisan Civil Society Organization Our main aim as an organization is to play the role of a good citizen and guard against any activity detrimental to the country. It is also our firm conviction that every Ghanaian deserves to be happy and we maintain that our collective happiness as a people is inextricably linked to responsible governance.

It is upon this that we wish to bring to light a few articles from the 1992 constitution of the Republic of Ghana.

Also, Article 58(1) (3) states that (1) The executive authority of Ghana shall vest in the President and shall be exercised in accordance with the provisions of this Constitution. (3) Subject to the provisions of this Constitution, the functions conferred on the President by clause (1) of this article may be exercised by him either directly or through an officer subordinate to him.

What is the parliament doing about the police officers taking money from drivers by the road without issuing a receipt that money can contribute to paying their salaries?

What is the parliament doing about the kidney machines that are killing people in our various hospitals?

Out of the several leadership and winnable qualities possessed by Dr. Bawumia, one that is fit to mention in this regard is his unmatched marketability on 3 different fronts: He (Dr Bawumia) is currently the most marketed personality within the NPP as far as the base of the party is concerned. Since he was nominated running mate for President Akufo-Addo in 2008 and for the past 13 years, he has consistently maintained touch with party grassroots across the country.

He has travelled extensively throughout the various constituencies preaching party policies to members during campaigns and Government policies whilst in power. He has probably done several tours across the country in a few years meeting party grass-roots members than all those popping up as potential aspirants have done all together in their political careers and these are some achievements of Dr Bawumia

“Dear Friends, as we look forward to the implementation of the 2021 budget in our second term, it is important that we take note of the accomplishments of the Nana Akufo-Addo government in our first term after inheriting an economy in crisis. Here are some:” Dr Bawumia wrote on Facebook on Sunday.

He then went on to list all the major first-term accomplishments in different sectors.

In other sectors, the Vice President also listed massive industrialization success under 1D1F, increased food production through Planting for Food and Jobs, the introduction of pension scheme for cocoa farmers, about 550,000 public employment opportunities, which included doctors, teachers, nurses, other health workers, and police officers.

“Notwithstanding these solid achievements, there are still challenges facing the Ghanaian economy and Ghanaians following the impact of the COVID-19 pandemic and I look forward to working with President Akufo-Addo to address these challenges and deliver on his vision to transform and modernize the economy for the benefit of all Ghanaians in our second term,” Dr. Bawumia wrote. To this, we say who else if not Dr. Bawumia

We are grateful for your presence for this coverage and we are convinced that the news will be streamed on your distinguished platforms. Thank you for coming, ladies and gentlemen from the press.