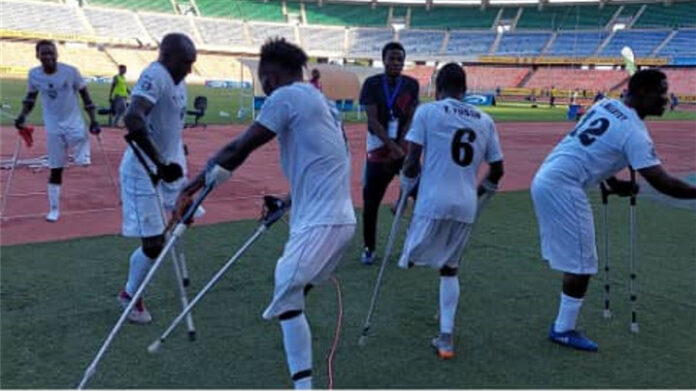 The Ghana National Amputee Football Team, the Black Challenge, booked their ticket to the grand finale of the Cup of African Nations for Amputee Football (CANAF) by humiliating the African and World defending champions, Angola 3-1 in the semifinals of the tournament.

The Black Challenge once again left no doubt in the minds of spectators and pundits that they are best on the continent if not the world at this moment.

The resilience of the team sprung up after conceding that goal and in the 22nd minute, their efforts led to another goal by Fuseini Iddi.

The second half saw the boys taking the game to the half of the Angolans, making mincemeat of their opposition.

It was just a matter of time for the Ghanaians to clinch the goal that weakened the world champions, as a red card killed any hope of recovery in them. Hamza Mohammed combined with Mubarik Mohammed to make the score 3-1. Hamza Mohammed, the goal scorer was substituted to give way for Richard Ekwam.

The Angolans suddenly turned into hockey players using their crutches to kick the ball against the rules of the game.

The players have vowed to bring the cup home after a seven-year tournament drought.

Ghana won the first CANAF in 2007, the first-ever in the history of the competition.

ALSO READ  UN World Oceans Day: AbibiNsroma Foundation insists "Let's not our greed overcome our needs"
AMA GHANA is not responsible for the reportage or opinions of contributors published on the website.