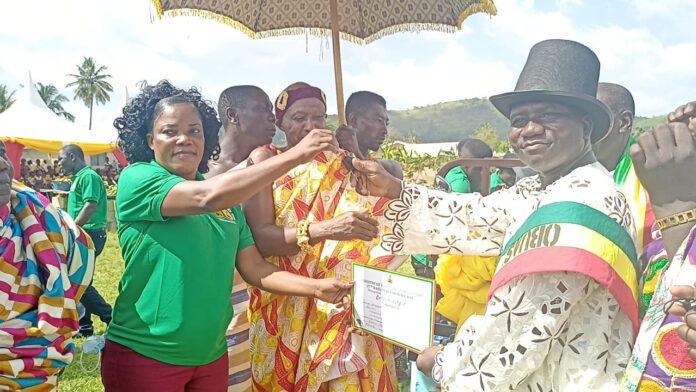 For his prize, Mr. Edmundson walked away with a MOTOR TRICYCLE commonly known as Aboboyaa, 32 inches LED TV, GTP wax print(full), Wellington boots among others.

The awards ceremony was instituted to reward the nation’s hardworking and gallant farmers and fishers for their commendable and meritorious contribution to the nation’s food security.

This year’s celebration was on the theme: “Planting for Food and Jobs-Consolidating Food Systems in Ghana “ was graced by the Member of Parliament for Obuasi East, Hon. Patrick Boakye Yiadom.

Hon Dr. Patrick Boakye Yiadom talked about key achievements made by the Government since it took over power in 2017.

He mentioned that Government in its bid to reduce post-harvest losses has implemented the One District One Factory program which has seen the establishment of factories including Agro-processing factories to provide a ready market for farm produce.

He called on Ghanaians to support the Government by paying their taxes to enable the government to rake enough revenue to finance its developmental projects.

In her keynote address, the Chief Executive for the Obuasi East District Honorable Faustina Amissah paid glowing tribute to the President His Excellency Nana Addo Dankwa Akufo-Addo for instituting the Planting for Food and Jobs.

She said the program has ensured the abundance of food staples that were hitherto described as seasonal.

She said, “Tomatoes, Cassava  Plantain were all described as seasonal foods but now, due to the introduction of the PFJ program, we have in abundance, these foods irrespective of the season”.

Again, the DCE pointed out key achievements made by the Government in the Agric sector. She said the recent recruitment of Extension officers to the District Agric offices lends credence to the level of seriousness the government has attached to the Agric sector.

The District  Director of Agric  Victor Owusu – Ansah in his speech talked about the steps taken by the Assembly to build the capacity of farmers.

He said, “the Assembly has educated farmers on the value chain concept to help link the various actors in the value chain, that is producers, processors, marketers and input dealers “.

He also revealed that the Agric Department in the district is collaborating with Anglogold Ashanti and Solidaridad to implement Climate Change Resilient Oil Palm Project ( CROPP). He mentioned that Farmland registration and stakeholder’s engagements have been completed.

The program is expected to capture 127 Oil palm farmers.