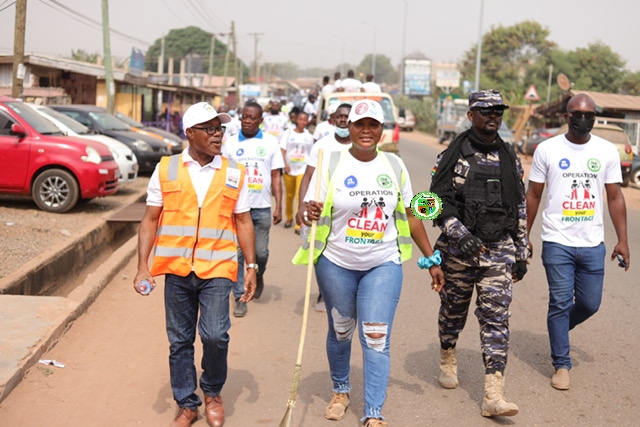 The Municipal Chief Executive (MCE) for the Ga East Municipal Assembly (GEMA), Hon. Elizabeth Kaakie Mann, has advocated the dedication of an hour every morning by business operators and residents to clean their surroundings.

This, she believes, is one way of ensuring the success and sustainability of the implementation of the “Operation Clean Your Frontage” initiative by the Greater Accra Regional Minister, Hon. Henry Quartey, under his “Let’s Make Greater Accra Work” agenda.

Hon. Elizabeth Kaakie Mann stated this when the Assembly went on a float on Tuesday morning to create awareness on the rollout of the OCYF campaign.

As early as 6am, scores of people, comprising Staff, Assembly and Unit Committee Members, Security Personnel, Market Women, and a cross-section of residents thronged the Abokobi Lorry Station for the float which will go into the history books of the Assembly as first-of-its-kind.

At around 8am, the Hon MCE led the team, all clad in OCYF branded t-shirts, through some principal streets in the Municipality starting from Abokobi through Ablorh Adjei, Old Ashongman, Agbogba, Haatso and Dome, amidst music from a brass band and public address system, interspersed with commentary educating the public on the OCYF initiative.

The Hon MCE who was accompanied by the Presiding Member (PM), Hon. Jesse Nii Noi, Municipal Coordinating Director (MCD), Mrs. Vera Akuffo-Mante, and the Municipal Environmental Health Officer MEHO Charles Ampomah Asabre, walked most of the time and entered shops and homes along the streets to distribute flyers containing educational messages and Bye-Laws on the OCYF campaign and also engaged them on what is expected of them as it is being rolled out.

Some business operators were seen busily clearing their frontages and surroundings before the team could reach their end, indicating their readiness to support the campaign and cooperate with authorities.

However, some were recalcitrant and adamant of the campaign as they were found doing business in a filthy environment.

The Hon MCE and the team educated and cautioned them of the consequences of their inactions.

The Environmental Health Officers also used abatement notices to some offenders along the route of the float.

Hon. Kaakie Mann and the team took the float off the streets and entered the Dome Market where she addressed them after walking through and distributing flyers and t-shirts to the traders.

She advised them to embrace the OCYF and comply with the Bye-Laws governing it.

Speaking to the media, Hon. Elizabeth Kaakie Mann noted that if all business operators and residents could dedicate one hour of their mornings to cleaning their frontages and surroundings, it would greatly impact the successful implementation of the OCYF campaign.

“The advice I’ll give is that they should take one hour every morning to clean their surroundings. They should ensure that they sweep around, clear choked gutters, and ensure their refuse are put in a bin before they start business”, she advocated.

She called on all to adhere to the Bye-Laws on the OCYF and ensure their surroundings are kept clean at all times, stating the essence of the float.

“Today, we’re on float intensify awareness creation on the campaign and to caution all and sundry about the punishment for offenders but from tomorrow, we’re coming to prosecute those who fall foul of the laws”, she said.

The PM, Hon. Jesse Nii Noi Anum, stated that the Assembly Members have been educated on the campaign and have positioned themselves to support its enforcement in their respective jurisdictions.

He corroborated the Hon MCE’s resolve not to shield any offender and urged the residents and business operators to do the right things in order to avoid being prosecuted and then resorting to seeking intervention from “big people” in society and political authorities.

The MEHO, Charles Ampomah Asabre, said his outfit, and for that matter the Assembly, were ready to execute the OCYF agenda.

He appealed for support and cooperation from the citizenry to ensure the successful and peaceful enforcement of the OCYF, indicating that he and his officers were not desirous of seeing people prosecuted but they are mandated to ensure a clean and safe environment for all to live and work in.

From St. Johns, at the premises of Vision 1 FM, where the team had a brief break to take lunch, they continued to Taifa through Atomic Roundabout to Kwabenya where the float ended.