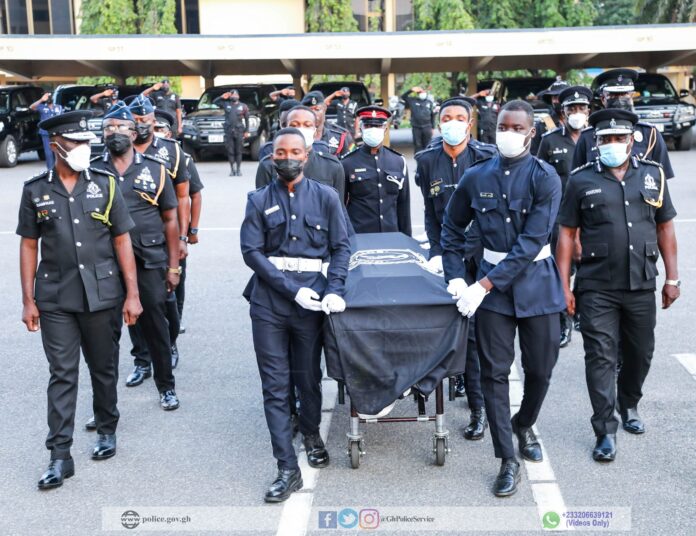 Since 2008, the NPP and the NDC parties created a kind of security around their parties by recruiting young men to form action and security groups similar to action troopers in the 50s. Many armed robbers, hardened criminals, and the unemployed joined the band-wagon. Very often these groups acted violently.

A member of an action group belonging to NPP was arraigned before a Kumasi court. The group, about eight in number, entered the court, wielding AK 47, machetes, and pistols.

The judge and the men around him took to their heels. The NPP action men whisked off their colleagues and disappeared from the court. Anytime the police services open their doors to recruit more personnel, the two major parties, the NDC and NPP, as a matter of protocol, select some of their security men to join the police.

Little did the parties know that many of the men they are sponsoring to the police are professional armed robbers and criminals.

The police were alerted and when they arrived at the crime scene they were able to kill two of the armed robbers and arrested four. It turned out that the two criminals that were killed and three of those arrested were police officers.

This is not the only crime they have committed. Sometimes these criminal officers provide ammunitions to their civilian colleagues who are armed robbers. When they were found out they were merely transferred. Ghanaians have placed much hope in the IGP to punish the culprits and to also make efforts to purge the Police Service of criminals.

The bullion van attacks are becoming very frequent mostly in the Greater Accra Region. Little did we know that police criminals were involved. Another violent attack on a bullion van occurred along the Achimota forest road.

Billions of cedis were stolen from the van. In January 2021, another bullion van was attacked in Accra when the police man guarding the van was shot by his own comrade in the police service. A policeman killing a policeman!

Another bullion attack was a very violent. This occurred in March 2021 at Spintex road. The robbers made away with GHc2bn.

It will surprise every reader to learn that it is not only some junior officers who are criminals but some senior officers are actively engaged in crime. According to Captain Smart, a presenter and journalist at Onua Fm confirmed openly that the police senior officers at Techiman master-minded a major armed robbery that occurred in Kumasi. The armed robbers were later arrested at Techiman. They were taken to the police station but the senior police officers took no action and allowed them to go scot-free.

Captain Smart chipped in an investigative story about a man who had hoarded hundreds of gallons of petrol and diesel at the basement of his house at Techiman. The police had a tip-off and entered the house. The man could not provide receipts to prove that he bought the petroleum products. The police Commander was informed but he asked them to leave the man alone and leave the house immediately.

In another development, the patrol police found two sacks, one contained gun bullets and the other which was bigger contained marijuana, cannabis and other harmful drugs. When the Commander was informed, he told the man to give the police GHc5000.

The police insisted they would still send the man and the two sacks to the police station. They gave the money to the commander. Sadly and surprising enough, the sacks were not opened. The man was told to go and the patrol policemen were transferred.

It is now clear that these criminals who wear police uniforms are either civilian criminals or the police themselves. The staff at the various banks have stakes in this. They inform the criminals when a bullion van leaves the bank or when a customer who has withdrawn a big amount of money is about to leave the bank, the cashier alerts a criminal who in turn follows the man to snatch the money from him.

A Ghanaian who has returned from Switzerland was robbed and killed by two policemen who entered his car after he left the Bank premises.

Before the 1980s, recruitment to the police was very strict, competitive but fair. There was nothing like political “protocols”. The police service was so attractive that many university graduates enlisted. The late Rawlings created a solid and a permanent condition for multi-party democracy. In order to compete effectively, security men were recruited by both parties. This gave rise to what has become known as “protocol recruitments” whereby top politicians and other eminent personalities in society were given “quotas” to present their own candidates for recruitment. The practice became widespread in society as a recruitment avenue to the army, choice courses in the universities, the police force, etc.

Many of the bad characters in the police service today are the result of these nefarious recruitment practices. Protocol recruits do not need to meet the stringent requirements since they came through some “big man or woman”.

I will suggest the IGP and the senior policemen should go back to the old days and learn more about honest and impartial appointments. These protocols recruitments must stop!

Beloved, the question I am asking is: Are we safe?