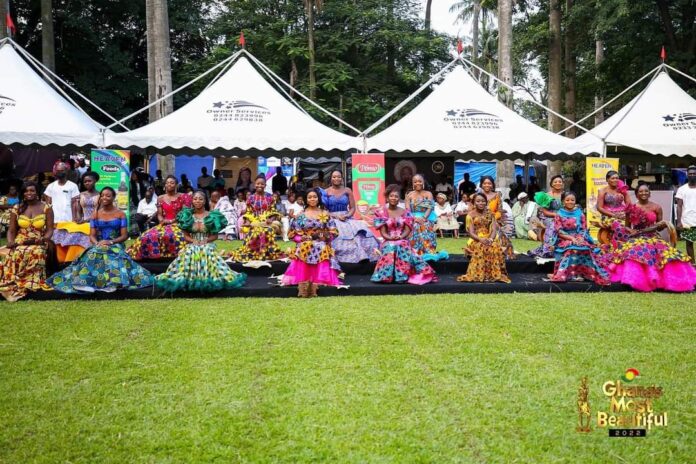 The launch of the 15th edition of GMB was well attended by chiefs, patrons, sponsors of the event, past contestants, and the public.  It was a colourful and fun-filled entertaining event, as the contestants arrived at the durbar ground in beautifully made clothing with their entourage amidst cultural display from their respective regions as they greeted traditional leaders, dignitaries, guests, and the public gathered at the event grounds.

The theme for this year is “Ghana’s beauty, Africa’s pride” and contestants are expected to exhibit knowledge about their regions and about Africa to show themselves as worthy ambassadors of the continent.

In the next 13 weeks, the ladies will go through training and undertake various contests for the selection of a winner who will take away the crown, bragging rights, and a car.

Mr. Francis Doku, General Manager 3TV, said the Media General team went around the country for the auditions and the 16 ladies were selected after the audition process. He asked the public to support them.

“GMB has kept Ghanaians connected to our roots. It brings together all cultures, breeds respect between tribes, erodes all kinds of discrimination and opens our eyes to the beauty that every single culture exudes”, he said.

The reigning queen of GMB, Safoa described the GMB process as a discipline that helps the ladies to cultivate the art of spontaneity to meet tasks upfront.

“GMB is a competition that teaches young ladies to  be able to stand up for themselves, protect their bodies in a dignified way, and also use their brains to work”, she said

TV3 began the GMB contest in 2007 to offer  Ghanaian young ladies the opportunity to unearth their skills and talents, project the country’s culture and showcase the beauty of the Ghanaian that reflects the total beauty and hospitality of the country.

Since its inception, Central Region leads with more wins of the crown, having won three times. The Greater Accra, Northern, Eastern, and Ashanti Regions have won twice each while the Volta, Upper East, Upper West, and Western Regions have coveted the crown once for each region

This year’s contest for the GMB crown is expected to be even more keenly contested as it coincides with TV3’s 25th Anniversary.

About  Ghana’s Most Beautiful (GMB)

Ghana’s Most Beautiful is a beauty pageant TV program that educates Ghanaians and the global community about the various cultural values and heritage in the sixteen regions of Ghana. The program is organized by TV3, the flagship television station of Media General, and its sponsors and partners. The aim of the pageant program is to promote development through culture and unity.

TV3 Network is Ghana’s largest private free-to-air television broadcaster with nationwide coverage. The network is one of the media stations of Media General and has a strong presence in all 16 regional capitals. It is the television station of choice for millions of Ghanaians across the country.

TV3 began on-air transmission in 1997 as the first private television station in the country. Twenty-five years down the line, the station continues to lead the industry, producing the most distinctive, relevant, and compelling content including news, drama, reality, sports, and entertainment programmes.

With its tagline, “First in News, Best in Entertainment”, TV3 has incomparably established itself as the most-watched free-to-air television station in Ghana delivering unmatched value for clients, viewers, and partners.