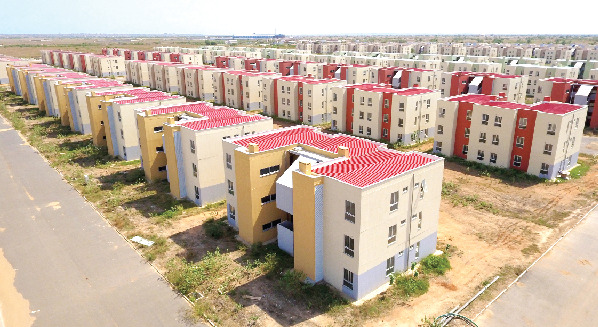 The National Tenants’ Union of Ghana is dismayed at the current situation of housing, and the challenges that the Ghanaian goes through to have access to secure, safe and affordable housing.

In the government’s 2020 manifesto pledges on housing to Ghanaians, it sort to promote low-income housing and relatively affordable housing that all Ghanaians irrespective of income levels can access and afford.

It is for this reason that the Union organized a press conference in September 2020 to declare its unflinching support to back their promise to improve the housing stock of the nation.

We believe that the government is still committed to adding to the housing stock of the nation as promised.

To intensify our advocacy for government to create access for the poor and low-income population in our society, we humbly call on His Excellency, the President of the Republic, to use his office to declare the Seglime affordable housing project a social housing for the poor who cannot afford the relatively high cost of affordable housing projects by government costing between GHC 99,000 and 340,000, which is in no term affordable for the ordinary Ghanaian.

The Union would like to take this opportunity to inform the public that between August and September, 2021, we would pay a working visit to meet the two former presidents of the Republic, Excellences, John Agyekum, Kuffour and John Dramani Mahama, the Chief Imam, His Eminence Sheik Dr. Nuhu Shaributu, His Royal Majesty, Nana Otumfuo Osei Tutu II, Rt. Hon. Speaker of Parliament, the Council of State, the Christian Council and the Pentecostal Council of Ghana.

The purpose of these visits is to canvass for support from them to add their voice to call on government to consider the suffering of majority of Ghanaians numbering over 11 million who are challenged to have access to affordable housing due to the high cost of private housing rental accommodation that do not make it possible for them to live in decent, secured and affordable homes.

Thus, with the need for government to intervene to house its people, we propose that government fast-tracks to complete the seglime housing project of 1,500 housing units and lease it out as a rent to own scheme.

We are also devastated at the pace and the level of commitment by government to review the rent laws of Ghana, Act 220, 1963. It has taken a little over a decade for government to gather the political will to initiate the legal processes to amend the rent laws of the Republic, which has suddenly resulted into plunging the rental housing sector to the sole control of private property owners with no regards to the doctrines of the rent laws of Ghana, and largely usurping the mandate and authority of the Rent Control Department of Ghana which has become a “toothless bull dog” that has been rendered impotent to bite.

The Tenants’ Union of Ghana will intensify its advocacy and collaborate with government in any way possible to have the rent laws amended to bring peace and security to the suffering Ghanaian masses who toil daily to have access to suitable places to lay their heads.