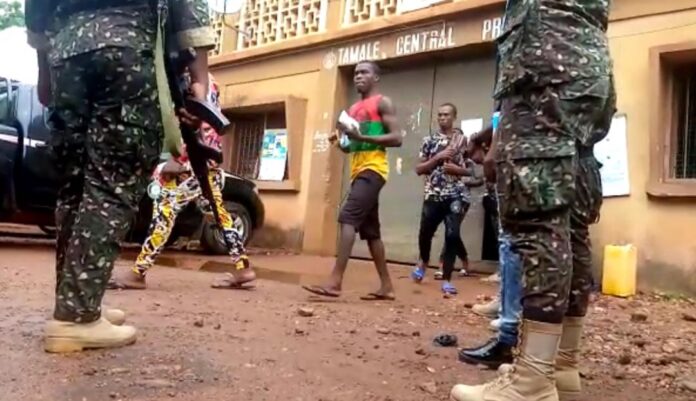 Some Nigerian nationals numbering 44 who entered the country illegally and got arrested for illegal entry and other related offences have been charged and made to face deportation.

These deportees including one female, who have served ninety days in the Tamale prisons were today deported back to their country.

They were convicted for illegal entry and living in Ghana without the required documents. Information gathered from the Ghana Immigration Service indicates that the said deportees were upon their arrest incarcerated and made to serve terms for various offences such as illegal entry and working without an approved permit from authorities in charge of migration.

Reports have it that most of them were under the custody of the Navrongo District Police Command in the Upper East Region. They were transferred to the Northern Regional Capital, Tamale to face prosecution.

Following the closure of the country’s borders due to the COVID-19 Pandemic, officers manning the borders have been saddled with illegal entry of foreign nationals into the country.

Although deportations of illegal migrants from neighboring countries have become a daily occurrence in Northern Ghana, this is the first time such a number have been made to face deportation.

The source revealed that all the necessary security arrangements have been made to ensure their smooth transfer back to Nigeria.

The Second-In-Command at the Tamale Prisons, Chief Superintendent Ocloo Divine Kwame, who confirmed the report revealed to inewsonlinegh that a number of West African nationals are currently serving terms at the Tamale prisons for various related crimes.

He said considering the porous nature of the border, personnel from his outfit “are on high alert to prevent foreigners from entering our borders without a permit.”