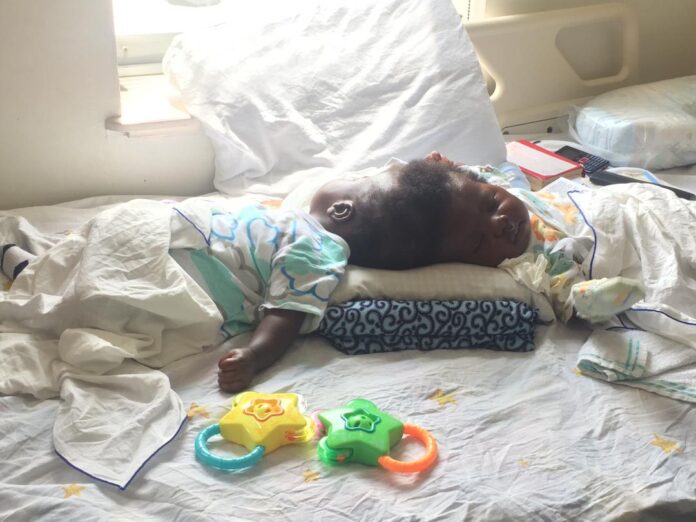 Preparation towards specialised surgical operation for three-month-old Siamese twins conjoined at the head and currently on admission at the Greater Accra Regional Hospital continues to receive cash donations from corporate bodies and individuals touched by their present condition.

Latest to donate towards this humanitarian but charitable cause is the Head of Corporate Affairs, Tobinco Group of Companies who doubles as an aspiring Presidential candidate of the Ghana Journalists Association, GJA, Albert Kwabena Dwumfour.

At a brief ceremony held at the admission ward of the hospital, Mr Dwumfour, a PR practitioner and media consultant accompanied by a team of senior journalists and members of his campaign team presented a cheque of 10,000 Ghana cedis to support management of the facility ahead of the high-tech operational exercise to be conducted in earnest.

Addressing the gathering, Mr Dwumfour said the gesture was inspired by his sense of love and generosity which is imbibed in tenets of Christianity to freely give back to society as Christ believers.

“God has bless some of us to be a blessing to others, and we must not relent in discharging such responsibility or obligations when we are in a position to do so.” he stated.

He requested the media to go beyond business as usual but instead identify issues that seek to address the vulnerability of the poor and marginalised in society.

“The media’s role as a watchdog is not restricted to only exposing wrongdoings or negatives but also identify the needy, the vulnerable and marginalised in the society, once we do that we mobilise public support for such in the society.”

This he said, was their core civic duty as media practitioners. He said in pursuant of his vision to create a vibrant and trustworthy relationship between the media and the society, it was imperative for the media to actualise this vision and heighten its campaign in soliciting the needed support to help the twins, who through no fault of theirs are faced with this life-threatening condition.

The success of the surgical operation of the Siamese twins fused at the head by team of medical experts and neurosurgeons will go down in history as the first separation of conjoined twins to be conducted in the country.

The Medical Director at the Ridge Hospital, Dr. Emmanuel Srofenyoh who received the cheque on behalf of the facility indicated that quite significant in the lead up to the maiden surgical procedure is the strong collaboration from a team of surgical professionals, plastic surgeons as well as renowned neurosurgeons drawn from well established facilities including the 37 military hospital who are ready to assist in the landmark surgery.

He said even though government has pledged to support in the said operation by way of medical supplies and equipments, it was still important for all to provide additional resources to compliment efforts in offsetting the 3 million Ghana cedis required for the conduct of the surgery, which he hinted, will to done in four phases with highly sophisticated equipments solely meant for such extreme rare operation.

While commending Mr. Dwumfour and his team for their show of responsiveness, Dr Srofenyoh, a consultant Obstetrician Gynaecologist did not mince words in assuring the public of their commitment to see to the successful conduct of the separation.

According to him, all the necessary tests including MRI scan have been done, stressing that it was time for the team to put their expertise to bare and showcase Ghana to the outside world, particularly South Africa, Namibia and the UK who are noted for handling such complex cases. “We feel that the time is now and that we know our neurosurgeons and associates are capable of handling the situation, that is why we have decided to go for local solution rather than foreign,” he noted.

Dr Srofenyoh was optimistic of the impending surgery and called on all well-meaning Ghanaians to donate towards a worthy cause and give life to the conjoined twins who are in dire need of financial support to successfully undergo the stages of the surgery.

A Consultant Neurosurgery at the Ridge Hospital, Dr Emmanuel Voado, said the life of the twins depend on the unflinching support of the general public even though his team comprising of 100 ‘much spirited’ medics and paramedics have taken up the challenge to carry out the surgery. He was optimistic of having a good surgery, adding that their resolve is backed by faith in God. “ Our practice here is anchored on faith, the that everything we do, we don’t do it by our might but rather the help of God.”

He said the case at hand is a rare case that happen across the world and occur in every 2.5 million births. Rarely, 60 percent of patience in such conditions die in their mothers womb whilst 35 percent get born but die within the first 24 hours. Dr. Voada however described the 3-month-old babies, male by sex as champions to be born alive. “If they were not champions they would not have made it,” He added.

He underscored the need for all to champion the call for support in this trying times as they may come out of their predicament and grow to become assets to the country, possibly renowned neurosurgeons who might save such situations to impact in the lives of others. Dr. Voada further appealed to individuals and corporate institutions to help provide adequate shelter for the parents of the twins as they battle with accommodation in a rented single room house.

Condition of the conjoined twins

As assured by the medical experts and neurosurgeons, the conjoined twin have a greater chance to survive the impending surgery since the structural part of the brain has not been altered or fused unlike the artery vessel. The first procedure out of the 4 stages of the surgery is expected to be completed within a month. This entails putting a skull expanded below the steam on top of the skull of the twins so that it will grow by time and cover the brain.

It is established that when a woman is going to have an identical twin, it start as one baby known in science as embryo. Along the line, the embryo may be divided and because they have the same genetic material, they are separated into two and become identical twins, having same genetics and features as against fraternal twins also called dizygotic twins. This result from the fertilization of two different eggs during pregnancy. Their formation is completely different with some resemblance but of same sex.

“If this happens and the division is not complete, that leads to the process of conjoined or Siamese twins,” Dr. Srofenyoh narrated. Conjoined twins can occur in front of the abdominal wall, the back, head or any part of the body.