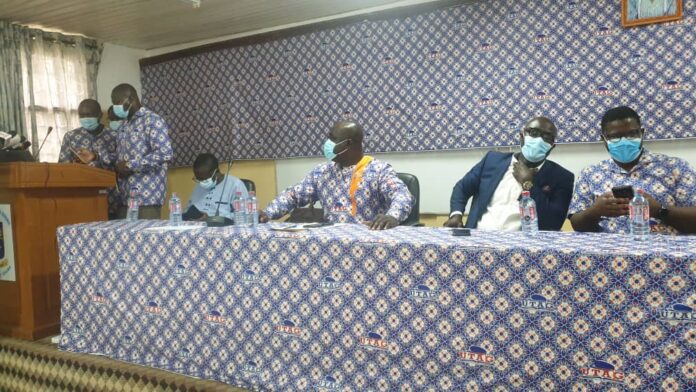 According to them, the association has had several meetings with the government over the Conditions of Service (CoS) which started in 2018,  government has always failed to respect the rules of engagement signed between the two parties.

Professor Charles Marfo, National President, UTAG, speaking on behalf of the Association at a press briefing in Accra, said government failure on the part of the government to comply with the association negotiation in an earlier press release dated 17th June 2021 will result in industrial action.

“Further delay on the negotiation beyond the end of July 2021 will compel UTAG to advise itself. Until our demands are considered and in-toto, UTAG would have no other option than to embark on industrial action by withdrawing teaching, which includes the conduct of examinations, marking of examination scripts, and other related matters, starting from Monday, 2nd of August 2021 until further notice”.

Professor Charles Marfo quoting Prof.Yaa Ntiamoa-Baidu’s report on the presidential Committee on Emoluments for Article71 Office Holders, June 2020; said “the committee strongly urges the government to also spare no efforts at reducing the wide gap between the highest and lowest paid public servants in the country.

…This can be achieved by implementing a roadmap (as was done during the tenure of former President Kuffuor for the health and tertiary education sectors ) for enhancing the salaries of public sector workers on the single spine salary structure. The goal must be that the salary earned by every worker should enable him/her to live in dignity”.

Speaking at a press briefing in Accra, Prof. Charles Marfo said “in 2003, upon a recommendation by a Standing Joint Negotiation Committee (SJNC), Government accepted a five year (2004-2008) roadmap for improvement in the levels of remuneration for senior members of the public universities in Ghana.

At the end of the road map in 2008, the monthly entry points salary in the Lecture was USD1,500 payable in cedi equivalent. Per the agreement of the five-year roadmap, a general increase in salaries in subsequent years would apply to USD1,500.

Also with the advent and subsequent implementation of the Single Spine Salary Structure(SSSS) policy for public sector workers in the country, in the negotiations that ended in January 2012, an interim market premium (IPM) was fixed at 114% of the basic salary and this led to a lecture being paid the cedi equivalent of USD 2, 084.41 from January 2012. Note, 114% of the basic salary was determined to ensure that the gains made with the SJNC in 2003 would be sustained.

Hence, the association urged all UTAG members to remain calm.