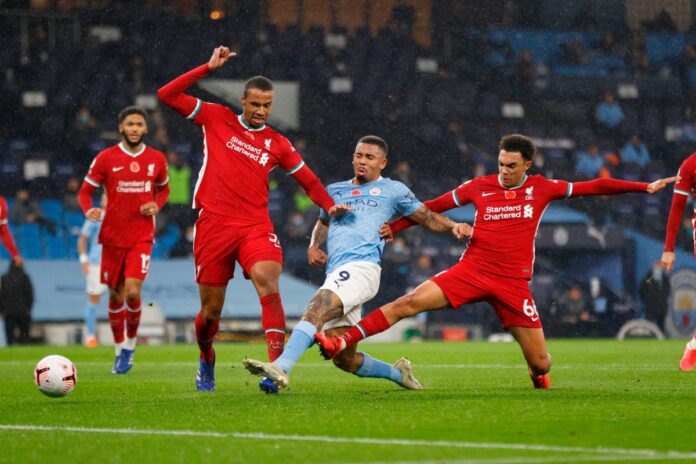 The pick of matches from the Premier League for this weekend sees Liverpool host Manchester City at Anfield on the early evening of Sunday 3 October, for a meeting of the champions of the past two seasons and two of the main contenders for the title in 2021-22.

City have shrugged off their slow start and look in fine nick heading into this clash on Merseyside, with manager Pep Guardiola calling on his team to continue their momentum.

“The last three weeks was so good. The way we trained was a little bit of a surprise after what we achieved last season,” said the Citizens’ boss. “The other side is that it is our sixth season together. We know each other quite well, except Jack [Grealish]. They know exactly what we want to do, what we want to practice, and I think the mechanism is much better.”

The round opens with the other Manchester v Merseyside battle, as United welcome Everton to Old Trafford for the early kick-off on Saturday 2 October. This clash sees Rafael Benitez looking to outwit counterpart Ole Gunnar Solskjaer and continue to build on the promise the Toffees have shown since the Spaniard’s arrival.

“They know we are working really hard to improve the players, improve every individual player and the team. The fans know and appreciate that,” said Benitez. “They know how the team finished last year and can see the difference in commitment and style of football. Everything is about improving what we have. At the same time, we cannot talk about that in three months if we do not perform.”

Other key clashes for this weekend include Chelsea hosting Southampton at Stamford Bridge; Arsenal facing a tough trip to the South Coast to take on Graham Potter’s well-drilled Brighton & Hove Albion; and a London derby between West Ham United and Brentford.

SuperSport viewers on DStv and GOtv can look forward to extended action from the Premier League, La Liga and Serie A, with matches scheduled to run from Friday 1 to Sunday 3 October 2021. SuperSport is also the only place to get English commentary on the legendary La Liga!

The top match from La Liga this round sees champions Atletico Madrid welcome Barcelona to Estadio Wanda Metropolitano in the Spanish capital city. Not only a meeting of traditional heavyweights and title hopefuls, this clash has added narrative stemming from the Blaugrana’s sale of Antoine Griezmann back to the Rojiblancos at the end of the transfer window a few weeks ago.

The Frenchman will hope to feature in this match and prove a point to Barca, where he struggled to fit in and make an impact. Meanwhile, Griezmann’s former boss, Ronald Koeman, has acknowledged that the Catalan club is in a transition period but believes the future is bright.

“Thanks to me, this club has a future,” the Dutchman stated. “It’s not just Pedri. There are still four or five players aged 18 or 19 who will be fantastic players for this club in three or four years. My relationship with [club president Joan] Laporta has improved, but something happened that I think… is not right.

“I was suggesting that the coach doesn’t have all the power. I talk too much. I think you should always create clarity. When you, as a club, let things work a bit and you are not clear about the future of a coach, then there is speculation. And if it is you who is the coach, then things are not pleasant.”

With one or both of Atletico and Barca set to drop points, the other title hopefuls such as Real Madrid and Sevilla will look to capitalise. Los Blancos will be away to Espanyol at the RCDE Stadium, while Los Nervionenses will be faced with an Andalusia derby away to Granada at Estadio Nuevo Los Carmenes.

Another team to watch is Valencia, who have enjoyed a good start to the season under manager Jose Bordalas and will fancy their chances of claiming three points away to Cadiz. Los Che have been urged to keep their feet on the ground by Bordalas.

“That question is always asked when good results are chained but the team has its feet on the ground, we know that this has only just begun, we must go step by step,” said the Valencia boss.

“We are looking for a way to be better than the rival teams. We must go step by step and there is a long way to go, it is a marathon, we must not fall into euphoria, the path is this, we must continue working to improve, which is our goal.”

The pick of matches from Italy for this weekend is the Sunday-night thriller from Bergamo which sees Atalanta host AC Milan at the Gewiss Stadium. La Dea and the Rossoneri are two of the most stylish teams in Serie A, as well as being clubs which are hopeful of winning the title – or at least finishing in the top four.

Atalanta, however, have not quite managed to find the consistency and performance they have demonstrated in recent seasons, prompting manager Gian Piero Gasperini to rue their inability to bring in another striker in the transfer market.

“I would always bring in new forwards, as you can make the difference in balanced games like this one. At the same time, I must recognise we were the top scorers in Serie A last season, so we just have to repeat that,” explained Gasperini. “We’ve been playing with the same strikers basically for the last three years. I do think the team improved in every other area and can give us satisfaction this season.”

This round also features the ‘Derby della Mole’, the Turin derby between Torino and Juventus at the city’s Stadio Olimpico on Saturday evening. Neither side will be satisfied with their start to the 2021-22 league campaign, but a win in this clash could spark their season and prove a turning point.

A busy Sunday opens with an early-afternoon clash between Bologna and Lazio, while the early-evening clashes see Napoli face Fiorentina away from home and Roma welcome Empoli to the ‘Eternal City’. The Neapolitans look a renewed club under manager Luciano Spalletti, with striker Andrea Petagna praising the influence of the veteran tactician.

“We demonstrated to be strong and to have prepared well for the game, Spalletti is great in this regard,” said Petagna. “Now, we need to recharge. The coach is great and makes everyone give their all, he gives us serenity and we perform our best. We are a strong team and we demonstrated this last year too, we were lacking something in our character and this season we have added it.”