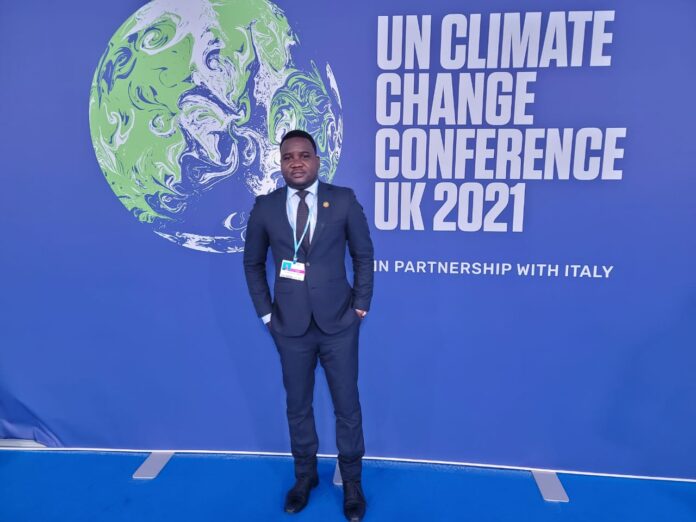 The Founder of AbibiNsroma Foundation, Mr. Kenneth Amoateng, has asked Africa not to despair about the happenings at the 26th climate change conference of parties (COP26) currently happening in Glasgow, Scotland.

By all accounts, keen observers have noted that things are not going the African way, raising jitters in some quarters.

Speaking to the media, he said from the fall out of events he knew COP26 was not going to be an easy one, considering it was one to handle issues that had been pending over the last two years.

This is mainly due to the COVID-19 global pandemic, whose outbreak last year led to the postponement of the meeting in 2020.

“We have spent this first-week handling issues that had been pending since last year,” he said.

According to him, he wanted assurance that things were moving in the right direction for the continent and that matters concerning Africa were being taken care of at the COP26 in Glasgow.

“Coming from Ghana, our main aim was to fight for climate justice, sea defence issues, and renewable energy for the whole continent,” the AbibiNsroma Foundation boss said.

He further lamented “we have tried all we could.”

“Long before the COP26, the CSOs had tried to have the needs of Ghana namely Adaptation, Climate Finance, and the need to consider Ghana a special needs and circumstances region integrated into the texts of the COP. Before the cop, engagements had been started, and we had pushed to have these issues in the agenda,” he noted.

He said that notwithstanding, it appears that the west had decided to prioritise achieving the 1.50c, an issue he said Ghana was not opposed to.

However, to save face, some remain sympathetic but are non-committal as to the support from the government in the direction of financial conditionS.

According to Mr. Kenneth Amoateng, it was evident that what developed nations’ leaders said and what their delegations wanted to achieve in the negotiation rooms were different.

“It underlined the difficulty of “access”, calling for “simplified mechanisms” and also highlighted thus: some of us cannot even borrow; so the issue of social bonds should be given priority for such countries”.

He continued….“Is it that Ghana is not being taken seriously? Is it that the continent is not mobilising? Why is the powerhouse of the world and our leaders suppressing the voices of Ghana? It is time for Ghana to begin mobilising to showcase its strength and ensure its climate issues are taken seriously.”