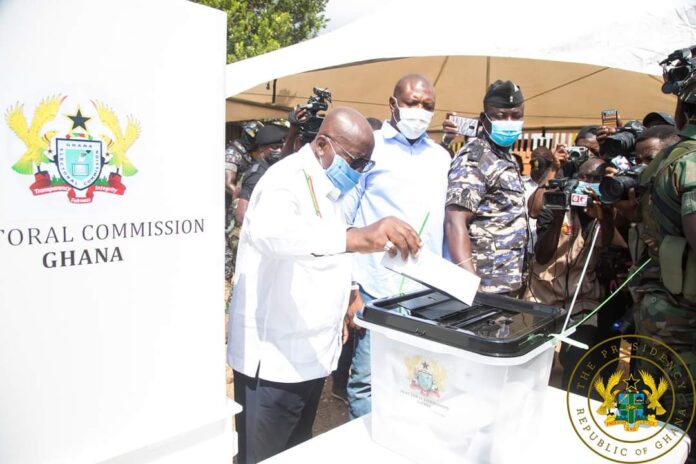 Similar to the previous seven elections, victims in the electoral violence cases recorded in the 2020 elections are yet to get justice despite persistent calls from various organizations and the public for the Ghana Police Service/National ElectionsSecurityTaskForce(GPS/NESTF) to speed up investigations and information to the public on the status of these cases. There have also been calls for the speedy trial of the cases which have been processed for court.

The Ghana Center for Democratic Development (CDD-Ghana), with support from the West Africa Network for Peacebuilding (WANEP), is, therefore, tracking the status of electoral violence cases recorded in the 2020 elections in 11 Constituencies in six (6) out of the 16 administrative regions in Ghana.

Thegoalofthisprojecttitled, Post-Elections Accountability on Elections Security, is to advocate for the speedy resolution of all the cases to engender public trust in the security and criminal justice system and limit the tendency for potential reprisal attacks in future elections.

CDD-Ghana conducted a desk review of cases reported in the news media about election-related violence during Ghana’s 2020 presidential and parliamentary elections. Each case was thoroughly profiled, and incidents involving deaths, physical harm, gun violence, and property destruction were prioritized for consideration in this pilot project.

The Center, in collaboration with the National Commission for Civic Education (NCCE), followed up on the cases to validate these reported incidents at the respective constituencies and Regional Police Commands where the incidents were said to have occurred. The follow-up was also to ascertain their current status within the justice delivery system. The constituencies and regions were selected based on their record of major electoral violence cases during the 2020 electoral process.

The fieldwork took place from December 6 to 10, 2021. The team visited and interacted with Officers in some Police Commands, the victims, and families affected by the incidents. A checklist was used to guide the process of soliciting information from Police Officers and victims or their families.

The team again contacted the Criminal Investigations Department (CID) at the Police Headquarters in January 2022 and was provided with further validation and updates on the selected cases. A total of 12 cases from 11 constituencies were validated, and the findings are presented in subsequent sessions.

§ Somefinancialsupportwasgiventovictimsduringvisitsbysomeinfluentialpersons.In addition, constituency party executives and some individuals provided some support to victims and their families. However, this form of support depends on the political party affiliation of the victims and or their families.

§ Inalmostallthecasestracked,thevictimsandorfamiliesmadenoofficialreportstothePolice. Actions were taken by the security officers present when the incidents occurred, and, in a few cases, official reports were made by their political party leaders.

§ Almost all the victims and or their families do not have information about the status of their cases. They seem to solely depend on the Police and the media for updates. Again, no dedicated family member(s) or individuals followed up consistently on the cases for updates. In a few instances where some follow-ups were done, they were undertaken by constituency executives of political parties to support victims who are party members or affiliates.

§ Out of the 12 cases tracked, four (4) are in court, three (3) are still under investigation, three (3) has been forwarded to the Attorney General’s (AG) office for advice, while two (2) have been settled by the parties involved.

I.          Reported cases at the District Police Commands

§ On whether the District Police Command received official reports from victims and their families regarding the cases and had records of them, all the District Commands visited confirmed having records of these cases. However, most (9 out of the 12) of the cases were not officially reported to the Police.

Regardless, the security personnel at the incident scene took it up and made some arrests on the day and subsequent days after the incident occurred. On the other hand, a few cases (3 out of the 12)were officially reported to the Police.

§ Concerning why the victims and or their families are not making follow-ups on the cases, most of the victims indicated that they expected the Police to contact them to aid the investigation and frequently brief them on the status of the case.

Others also stated that the slow pace of the justice delivery system, especially for election-related violence, informed their decision not to pursue their cases. Again, some do not trust that the judicial system will deliver justice on their behalf. Instead, they will seek revenge when their party regains political power.

§ Out of the 12 cases tracked, four (4) of the cases are currently in various courts. They include the following:

1. In Savelugu, a representative of the District Police Command indicated that the case was reported at the Municipal Police Office. However, it was being handled by the Regional Crime Investigation Department (CID) in Tamale. A representative of the CID in Tamale indicated that the case was initially at the Circuit Court and was later forwarded to the Magistrate Court in Tamale for Committal. There have not been any proceedings or hearing on the case at the Magistrate Court since it was forwarded.

2. In Dormaa West of the Bono East region, a representative noted the Regional Criminal Investigations Department (CID) received advice from the Attorney General’s (AG) Department, so they proceeded with prosecution at the Wamfie Magistrate Court. However, the case is always adjourned anytime they go for court proceedings. The last court date was December 15, 2021, and again, it was adjourned to January 25, 2022.

3. The recorded incident at Ablekuma Central Constituency is being tried at the Accra Circuit Court.

4. A Cape Coast Circuit Court has granted bail to some four (4) persons who were arrested by the Kasoa Divisional Police Command in the Central Region for burning of motorbikes at a registration center in Kasoa.

§ Three (3) are still under investigation a year after the incidents occurred. They include the following:

1. the shooting incident at the Steps to Christ School at Kasoa on December 7, 2020, where unknown gunmen shot two people

3. the burning of the Electoral Commission’s office at Fomena constituency

§ Three (3) has been forwarded to the AG’s Office, and the Police is awaiting advice from the AG’s office. They include the following:

1. the case involving the killing of a 28-year-old graduate of Teacher Training College at Banda Ahenkro during the voter registration exercise

2. the shooting incident at the Techiman South Constituency in the Bono East Region leading to the death of two people

3. the shooting incident at Odododiodio Constituency leading to the death of two people

§ Two (2) of the cases have been discontinued (settled by the parties involved) because the political parties involved – the New Patriotic Party (NPP) and the NDC decided to resolve the cases amicably outside of the courts. These are the clash between NPP and NDC party supporters at a rally at Kpandai and a clash among NPP party supporters at Asante Akyem North constituency in the Ashanti Region. (Refer to the appendix for details of the cases)

§ The medical expenses for victims and other related costs and support for affected families were catered for by the political parties, MP aspirants or the sitting Member of Parliament (MP) in their respective constituencies. For instance, the victim who was shot in the arm at Kasoa in the Awutu Senya East Constituency on December 7, 2020, said the NDC’s 2020 parliamentary candidate paid for his hospital bills while the NDC’s Constituency Chairman provided support by taking care of the school fees of his three children.

§ Regarding the burnt motorbikes at the Steps to Christ center in Kasoa during the voter registration exercise in July 2020, the NDC’s 2020 parliamentary candidate replaced the motorbikes with new ones for the victims.

In the Ajumako Enyian Assam Constituency, the sitting MP paid the hospital bills of the victim whom his opponents attacked. In the Savelugu Constituency, three (3) out of the four (4) victims, including the deceased’s family, indicated their affiliation with the NDC party; hence, they were compensated by the party’s MP of the constituency.

CDD-Ghana, WANEP, and NCCE will continue to monitor and update the public on the status of the cases for the next two months. On account of the one-year anniversary of the 2020 elections, the project partners wish to commiserate with the victims and families for their loss. We urge them to remain calm and have trust in the criminal justice system to deliver justice to them. In view of this, the following recommendations are being made in the pursuit of justice for victims and families:

§ The Ghana Police Service should periodically provide the public with updates on the status of each of the cases as a way of enhancing transparency in the handling of these cases.

§ The partners urge the respective Police Commands handling the cases to expedite action on the pending investigations.

§ Weurgethecourtsthathavecommencedhearingofthecasestoconsiderthecircumstances of these cases and the implications on Ghana’s democratic and rule of law credentials and give expeditious hearings for appropriate and deserved justice for the victims, and also serve as a deterrent to others.

§ There is the need for continuous sensitization and public education on the effects of electoral violenceinaffectedcommunitiesbyagenciessuchastheNationalPeaceCouncil, NCCE, and Civil Society Organizations (CSOs).

§ The Ministry of Interior and the Ministry of National Security must take steps to support the affected victims and their families.

With a mission to promote and deepen democratic consolidation, good governance, and inclusive growth and development, the Ghana Center for Democratic Development (CDD-Ghana) works to support and promote a free, peaceful, and well-governed democracy in Ghana and in other parts of Africa.

CDD-Ghana has cultivated an enduring reputation as a leader in the field of democracy and governance, which enables the adoption and implementation of targeted strategies aimed at addressing the fundamental issues hindering citizens from enjoying the full benefits democracy and good governance has to offer.