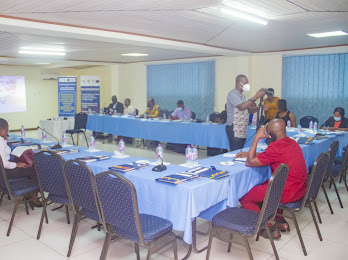 Child labour and its worst forms are one of the biggest concerns and challenges to human rights worldwide.

The involvement of children in hazardous activities as a result of child labour threatens their health and safety standards and makes them prone to diseases, injury or death.

This is because its multi-faceted nature makes it the responsibility of all stakeholders to join forces and strategize to fight the menace.

With this, the Ministry of Employment and Labour Relations in collaboration with the International Labour Organisation and the trade for Decent Work project has opened a 3-day workshop in Accra.

The workshop which commenced from Tuesday, 28th to Thursday 30th June 2022 is aimed at enabling effective informal sector labour inspections, and understanding the legal and particularly criminal aspects of it.

Participants at the workshop have been drawn from government agencies, ministries and informal and formal sector players among others.

It will also ensure that the principles of international labour standards, including the elimination of child labour and forced labour, are implemented at the initiation level and promote good governance in the world of work, making Decent Work a reality.

Addressing participants, the Head of the Child Unit at the Ministry of Employment and Labour Relations, Madam Elizabeth Akanbonbire, stated that the importance of the training is to enable effective inspections across all formal and informal sectors.

She added that the MELR has held a series of engagements with stakeholders within the sector to fight child labour and sanction offenders.

“We work with other partners who also have the mandate to probably prosecute perpetrators, sanction them and also give support to the children. We are working very closely with the anti-human trafficking unit of the police, secretariat unit of the Ministry of Gender, Education and all those who matter,” she said.

“Sensitization has gone on, we are working with partners who usually are at the district and community level. They rescue some of the children from trafficking and forced labour. The reaffirmation of the government’s commitment to combating child labour with support from the International Labour Organisation, ILO, is vital,” she added.

On her part, Dr. Akua Ofori Asumadu the Officer In Charge of the ILO-Ghana and the Trade for Decent Work Project stated that Ghana’s participation at the ILO conference has been very key.

“Ghana is a member of the organisation and attends the conference yearly, and has been reporting faithfully since 1957. That is why ILO is supporting the government, it is government itself that says we need support from the ILO which means that government recognize the importance of these conventions that they have ratified. Convention 182, talks about the elimination of the worst forms of child labour and convention 138 talks about the minimum age that one can work,” she stressed.

She, however, reiterated that the minimum age of working is classified as 18 years and above.