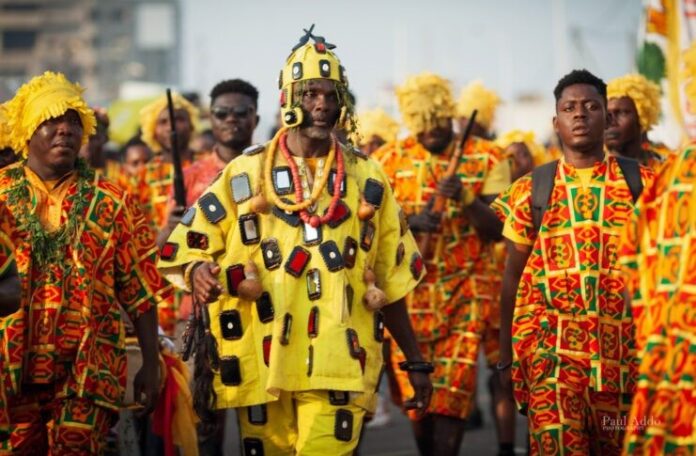 Dzen Nako, an Accra-based cultural Troupe last week thrilled a fully-packed National Theatre to an exhilarating rendition of traditional dances and a dance drama titled “Bukom” during the 5th edition of the Ghana Culture Day celebration in Accra.

The event organised by the Ghana Culture Forum in partnership with the Ministry of Tourism Arts and Culture, the National Commission and Culture (NCC) and the National Theatre is aimed at establishing a platform that brings together civil society organisations and individuals involved in the field of culture.

The well-staged dance drama production by Dzen Nako tells a story about juvenile delinquency resulting from the lack of proper parental control, neglect and abuse.

The cultural group, true to form, executed the showpiece choreographed by Hyde Edmond as if their very lives depended on it.

Before the cultural group came up with the dance drama, they mesmerised the audience with some selected traditional dances including Astea from Volta Region and Adowa from the southern part of the country.

The professionalism of the cultural group was evident in the smooth transition from one dance to the other and their movements fascinated the audience.

In telling the story, the choreographer compelled the performers to use their lithe bodies in rhythm with the well-arranged drum music to hypnotise the audience.

The cultural group of well-orchestrated body movements managed to capture the routine of daily life in Bukom, a suburb of Accra.

The incorporation of Kpanlogo, a Ga recreational dance, greatly enhanced the atmosphere of the production.

So electrifying was the performance that the audience simply appreciated the glorious talent that was presented on stage.  All in all, the Bukom presented on stage at the National Theatre was a glorious spectacle which had several dignitaries including Hon. Catherine Afeku, the Minister of Tourism, Arts and Culture and Professor Esi Sutherland-Addy, Convener, Ghana Culture Forum (GCF), in the audience.

ALSO READ  It’s a Happy Day for Darko Vibes
AMA GHANA is not responsible for the reportage or opinions of contributors published on the website.