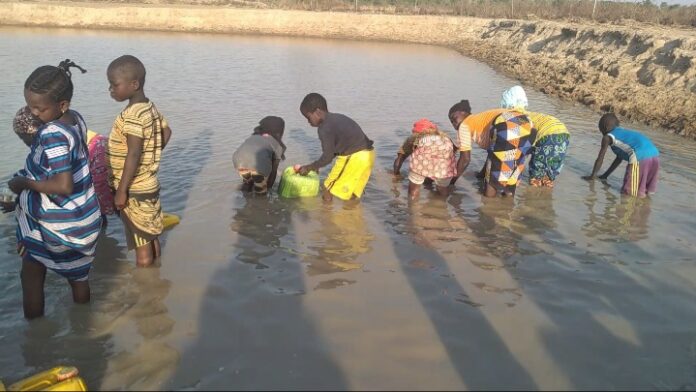 Access to potable drinking water has become an expensive commodity for residents of Gburimani in the Tolon District of the Northern Region.

Residents say they depend on the dams as their only source of water in the community which is fast drying up due to the harmattan session.

Chief of Gburimani, Abdulai Mohammed in an interview said several attempts to source assistance from the government to remedy the situation have been unsuccessful.

According to him, the community is also compelled to share the same water source with animals such as cattle, goats, and rams (sheep) since there is no other alternative.

“For donkey years now we don’t have portable drinking water and I have personally sourced help from both government and NGOs to no avail.

“So many samples of soils have been taken by World Vision International but all they tell us is that the water table in our community is very far,” He explained.

He added the Catholic Relief Services (Village Water) had also dug several dugouts in the area to no avail.

Assemblyman for the area, Ibrahim Mohammed said members of the community have made several appeals to him over their predicament.

Mr. Mohammed said he has forwarded these complaints to the District Chief Executive (DCE) and newly elected Member of Parliament for Tolon, Alhaji Habib Iddrisu for action.

“The people or Gburimani are currently sharing water with animals. The same milky like water when you bath with it you’ll are some whitish disease on your body,” he decried.

Ibrahim Mohammed also appealed to Non-Governmental Organizations (NGOs) as a matter of necessity to come to their aid.