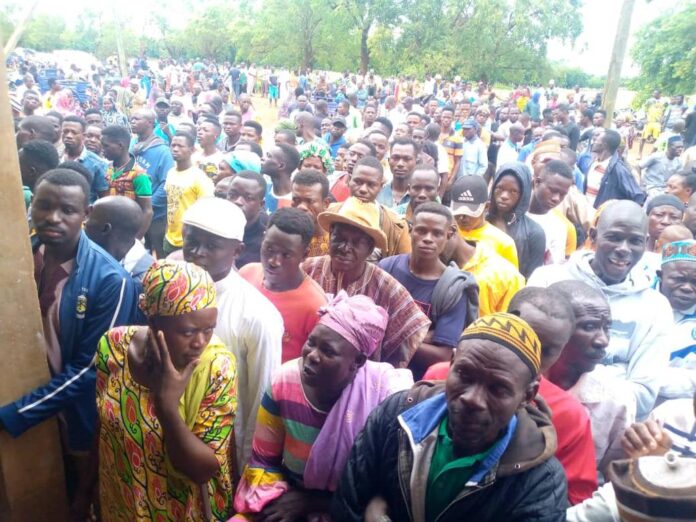 There was near chaos at the Binduri Agriculture office on Tuesday when hundreds of local farmers thronged the office in search of fertilizers.

Farmers in the country have become stranded for months as fertilizer-producing companies have ceased production and supply due to non-payment by the Ministry of Agriculture.

The situation, according to players in the Agric sector is dire as this would impede the advancement and therefore successes chalked by the Planting for food and Jobs, one of the most viable legacies this current government would bequeath to farmers in Ghana.

Deep throat sources at the Ministry of Food and Agriculture say the non-payment of fertilizer producers is due to the power play between the Finance and Agriculture Ministries.

Frantic efforts made by the Ministry of Agriculture to received clearance from the Finance Ministry to pay the fertilizer producers have proved futile according to our checks.

Due to non payment for the production of fertilizers, companies involved have been unable to fulfill financial obligations to their banks hence can no longer receive assistance from the banks and also import raw materials for production. This has led to a cease in supply of fertilizer from April to July.

Affected farmers tell journalists that they have missed the opportunity to harvest major production because of these factors, hence speedily losing their lifeline, in terms of business and trade.

“…..Currently, our only hope is in the minor farming season in August….we are appealing to the Ministry of Finance to pay the monies owed us as soon as possible because its left with few weeks to the minor season”. One of them said.

Another also lamented ‘we need to prepare ahead of the minor season and before that, we must get assurance from the government of the distribution of fertilizers’.

One of the glowing and widely accepted flagship social intervention programmes by the Government of Ghana is the Planting for food and Jobs which was introduced through the Ministry of Food and Agriculture as the supervising Ministry.

Subsequently, Planting for Export and Rural Development and Rearing for Food and Jobs were launched in Dunkwa- On- Ofin and Wa respectively.

On account of its success in 2017, government implemented an expanded version of the PFJ in 2018 with more ambitious targets of 500, 000 farmers.

At the end of the day, a total 577,000 farmers had accessed the inputs in excess of the planned target for the year.

The PFJ programme continued with an enrolment of about 1,183,313 farmers. For 2020 PFJ season, the target is to reach out to 1.2 million farmers in the country.

The fear of many is that, the failure of their program would not only render several thousands unemployed but could lead to an unexpected famine in Ghana soon.

“We are therefore appealing to Hon Ken Ofori Atta to put aside all parochial interest and do the needful by issuing the necessary funds for payment to the fertilizer companies”. One farmer noted sadly.