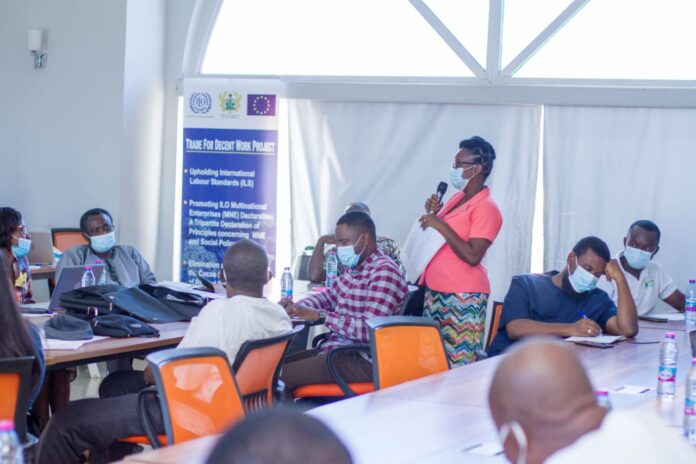 As part of the collaborative efforts of the Trade for Decent Work Project with the CLU in the area of the elimination of child labour, a two-day residential workshop was held to engage stakeholders on the review and development of the Hazardous Activity Framework (HAF) on Child Labour.

The workshop which was held on (Thursday 4th – Friday 5th November 2021) at Hill View Hotel, aimed to seek experts’ opinions to fine-tune the document and discuss the modalities of adopting the revised HAF into law.

The project and the CLU are leveraging on actions of the government to end the WFCL. Among these actions taken by the government include the following:  ratification of the International Labour Organization (ILO’s) Worst Form of Child Labour Convention, 1999 (No. 182) on the 13th June 2000 ratified; developed a Hazardous Child Labour Activity Framework (HAF) for the cocoa sector in 2008; and subsequently, a general HAF covering 17 sectors in 2012.

The overall objective of the HAF was to provide a comprehensive, age-appropriate contextually relevant and acceptable hazardous child labour framework to the enforcement of the provision of the Convention and other legal frameworks on children and to guide implementation and monitoring of interventions.

In an interview with Eugene Narh Korletey, Chief Labour Officer, Labour Department, he said it was essential to expand the engagement by bringing experts in the fields covered by the current HAF to further review the inputs from the MMDAs and communities and provide their inputs to enrich the document due to some cultural background lapses to Ghana.

“It is now important to streamline these inputs, zone out the hazardous activities area and expand the will based on the prevalence of specific hazards. This will enable government and partners devise specific strategies in these zonal or geographical bases to effectively eliminate WFCL in all sectors and as well consider the modalities for adopting the revised HAF into law”.

Adding that, Ghana has worked very hard towards the elimination of indecency in the world of work, which Child Labour is one of such issue the government with its development partners have worked out laws and regulations to govern employment relationships in this country.

“Moving further, there are major indicators that must be able to determine what the work is for the child. And this government has gone further to develop the hazardous actively framework. We have worked the HAF for some years now.”

Speaking on their major challenge, Mr Eugene Narh Korletey stressed that, “our major challenge will be data gathering, which has been a critical area for us, so as we review and move further we will be looking at that will be the approach to address the issue of data so that we can collect data and develop the situation analysis of the whole issue”.

On what Child Labour is, she explained that it is labour that is undertaken by a child below age eighteen that is detrimental to the child’s physical, mental, moral, social and psychological wellbeing.

She urged everyone to look towards getting every child everywhere to be out of that kind of forced labour that will be detrimental to their physical, mental, moral and their ethical survival as Ghanaian people in the society.

The review Hazardous Activities Framework is within the context for the Trade for a Decent Work Project. Which is a project that is a collaboration between the ILO funded by the European Union and implemented in collaboration with the Ministry of Employment and Labour Relations, The Ghana Trade Union Congress and The Ghana Employers Association.

In accordance with Article 4 (3) of the Convention, the Ministry has commenced the review of the HAF which has been in operation for almost a decade.

The review exercise will take into consideration new provisions of the amended Minerals and Mining Act, 2015 (Act 900) and the Minerals Commission Act, 1993 (Act 450), the Labour (Domestic Workers) Regulations, 2020, LI 2408 and similar ones as well as the changing dynamics of the world of work with regards to the technological advancement, evolution of work ethics and culture, climate change and diversification of agriculture that might have introduced new hazards and made some earlier known hazards obsolete.