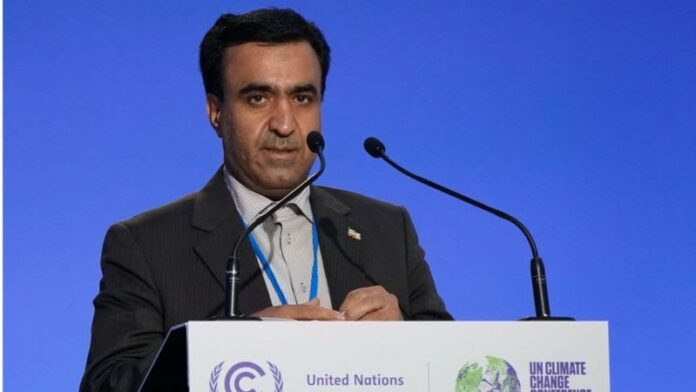 Iran will ratify the landmark Paris agreement on climate change only if sanctions against it are lifted, a senior leader has told the AmaGhanaOnline.com

Iran is the world’s eighth-largest CO2 emitter, yet is one of the few countries not to ratify the Paris pact.

Emissions have soared in recent years as overseas investments in renewable energy have collapsed.

The government has also violently suppressed protests about water shortages.

While the country’s president Ebrahim Raisi has chosen not to come to the UN climate change summit in Glasgow, the Iranian team is here to plead for relief from the economic blockade.

“Iran has been impacted by climate change like every other place in the world,” said Mr. Salajegheh.

However, Iran has been criticised for damaging its own water supply by drilling over a million wells and building around 700 dams.

On the issue of the Paris climate agreement, Mr Salajegheh said the pact had to be a “two-way street.”

“When you have oppressive sanctions in force it does not allow for any kind of imports even medicine which is a human fundamental right,

“If the sanctions are removed, then we have a commitment towards the international community, it is at that time that they can transfer modern technology and finance to us especially in the area of renewable energy so we can modernise our deteriorating infrastructure,”

But can Iran be trusted on climate change?

The country had originally said that even if sanctions weren’t removed they promised that CO2 would be reduced.

The reality is somewhat different, carbon pollution has in fact gone up, and the country is rated as “critically insufficient” on climate change by the Climate Action Tracker.

The country hasn’t submitted a carbon cutting plan since 2015. Experts say their emissions are likely to increase by 50% by 2030.

“What happened was we said that we would reduce by 12% if sanctions are removed. The sanctions were not removed,” said Mr Salajegheh.

As a country that is massively dependant on oil and gas exports, how will Iran cope in a world that will likely see a shrinking demand for fossil fuels?

“Oil and gas will end one day but if we use it in a way that brings the emissions to the minimum then we can use it as well as renewables,” Mr. Salajegheh said.

While the rest of the world is engaged in the discussions here on cutting carbon and raising finance for the developing world, there is little room for debates with Iran.

The country’s representatives are here to make a point about sanctions.

Right now, they say they can’t join the global fight against climate change. But they want this to change.

“We have come here to say that Iran is a nation engaged with the whole world. We’re all part of this global village and can help each other,” the head of their delegation said.

“When you have an economic terrorism that has blockaded us, we are now saying remove this and we can engage with the world and then rest assured that we will be here.”

ALSO READ  Okyeame Kwame recalls how his anti-Galamsey comments incurred the anger of Galamseyers
AMA GHANA is not responsible for the reportage or opinions of contributors published on the website.