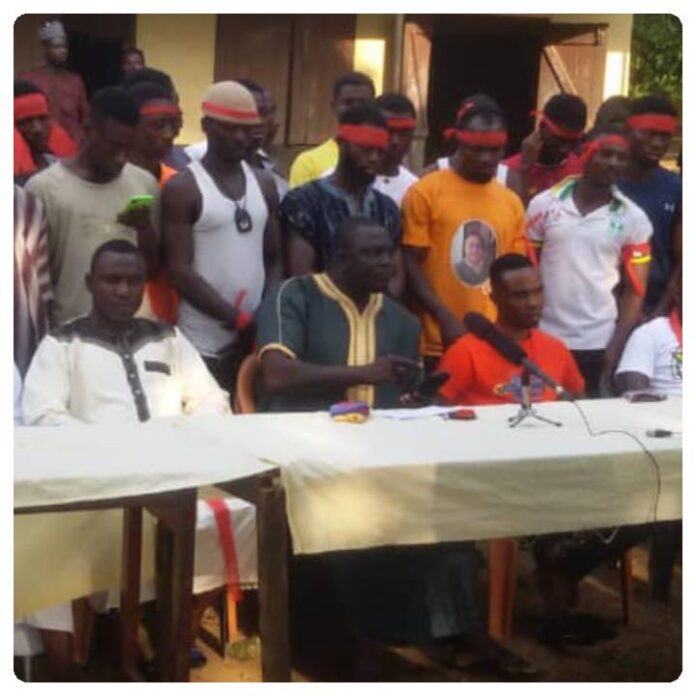 The Public Relations Officer (PRO) of the Zongo Youth at Akim Ofoase, Mr. Buhari Abubakari also known as General Buhari, in the Akyemansa District of the Eastern Region has bemoaned the unfortunate shooting incident involving some youths from Akim Brenase against the Zongo Youths of Akim Ofoase.

According to General Buhari, the incident, which left one person dead and several others injured was senseless and idiotic.

He was addressing a press conference at Akim Ofoase Zongo on Friday 28th July 2022.

He added that, the shooting and butchering of other six people who are battling with their lives at Akim Ofoase Roman Hospital was in connection with the Ofoase Zongo Youths assisting in the arrest of a wanted ill-famed armed robber who has been terrorizing the communities for a long time now.

“Our youth only did what’s expected of every good citizen of Ghana. Yes, they only assisted in apprehending a known rascal who’s the leader of the armed robbery group in the area and has been on the wanted list of the Ghana Police Service in Akim Ofoase.

Our youth deserves a national award for the good work they did and not what we have been met with,” he said.

On Monday 25th July 2022, this infamous armed robber with his group stormed the Outlaw Spot, a very popular Spot in Akim Ofoase to carry out their robbery at about 20:30hrs.

The Zongo Youth sensing chaos, quickly mustered the courage and gave them a hot chase which resulted in they apprehending the leader of the gang and later been handed over to the police.

The father of the notorious armed robber later gathered more gangs with guns and machetes in two tricycles to attack the Zongo Youths of Akim Ofoase.

“Our youth who were in the town at the time picked the intel and quickly chased him, arrested and handed him to the Police in Akim Ofoase.

The father of the criminal who feeds on the proceeds of his robbery mobilized his gang members in two tricycles with guns and machetes to attack our young men for no crime,” he said.

The gang that attacked the youths has also vowed to raid the police station and barracks to free their leader who’s in the grip of the Akim Ofoase Police.

“What crime did our youth committed in this regard to warrant such animalistic attack from the rest of the criminals who have vow to attack everyone including the Police Barracks to free their leader” he asked.

He charged the media personnels to inquire from the neighboring communities like Kotokuom, Ofoase Kuma, Praso, Ofoase Panyin and Brenase itself and they’ll know the havocs caused by these hooligans.

“One cannot travel through those towns after 5:30pm. They place barriers and robbed them, slashing them with machetes and other deadly weapons,” he added.

The Akim Ofoase youth are seriously worried and disappointed about the way some media outlets and online portals implicated them in their reportage by making them rather look like the culprits.

“All we want is justice for our brother Daddy who have been killed and the six others who are battling with their health.

We need that justice to prevail as early as possible to prevent any possible reprisal and revenge attacks from us.

We are law abiding citizens but we won’t allow this issue to rest until the right justice is served us. We trust the Police leadership to ensure we get the needed justice accordingly,” he added.