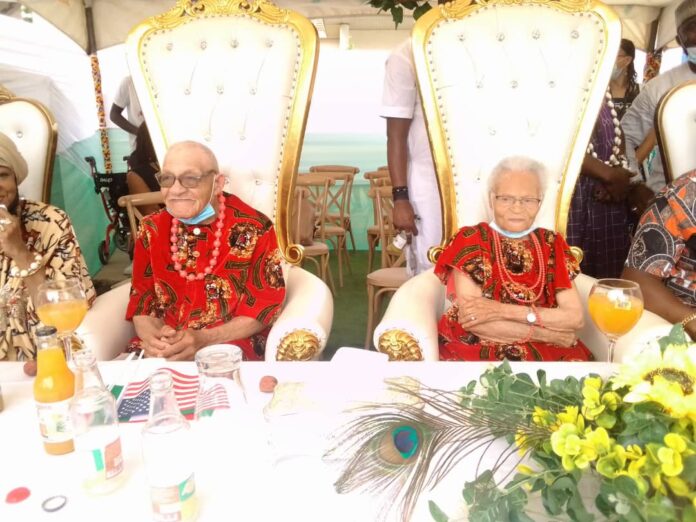 MD. Voila Ford Fletcher and his brother Hughes Van Ellis were on Wednesday, 18th August hosted at a colorful traditional ceremony at the palace of the king of the Igbo community in Accra.

This was to officially welcome and appreciate Md. Voila Ford Fletcher and her entourage by the HRM AMB Eze Dr. Chukwudi Ihenetu and the Igbo Communities across the globe after surviving the deadly massacre.

The 1921 massacre is highlighted to be one of the darkest times in the history of America.

Md. Viola Ford Fletcher, 107, is known to be one of the longest survivors of the tragedy in Tulsa, Oklahoma.

His brother, Hughes Van Ellis is also at the age of 100 years old.

The function saw some display of local traditional Igbo foodstuffs, Drinks, Artifacts among others as well as cultural performances on Igbo traditions to sell the message of their heritage and background.

According to the king, the fate achieved by the Igbo community will be a lifetime mark in the history of Nigeria.

He also called on all Africans in the Diaspora to reminisce their background and heritage.

“We also want to tell all African-Americans to remember that they are coming from somewhere. Africa is a land of milk and honey and a land where there is enough. We need people with experience in all sectors of life to come down here, let us work together, let us make Africa great together”, he stated.

Founder and Head of Mission of the Diaspora African Forum, Ambassador Ericka Bennett stated that the significance of a heritage plays a major role in the development of a nation.

She said, “We are very happy to be here because we also have our lineage from Africa and it is very critical for us. We needed to bring these two iconic people here for the first time to let them have a feel of their forefathers’ background and history. We have learned a lot from here, ” Dr. Ericka Bennett said.

She expressed her gratitude to the HRM AMB EZE Dr. Chukwudi Ihenetu for the support and achievement.

“I really want to thank his Majesty for the support and encouragement. I called and told him we have two iconic people and they must know Nigeria so I said I will bring Nigeria to you, and that was what I did. We knew you (Majesty) will do it and I am so glad for this day. So on behalf of our delegation, we want to say thank you,” she added.

In attendance at the ceremony were the sub-chiefs of the Igbo community, the Nigerian High Commissioner, Hon. Esther Adebola Arewa, a ministerial delegation from Nigeria, Nigerian women’s group among others.

ALSO READ  Black American hosts Ganja Conference in Accra
AMA GHANA is not responsible for the reportage or opinions of contributors published on the website.